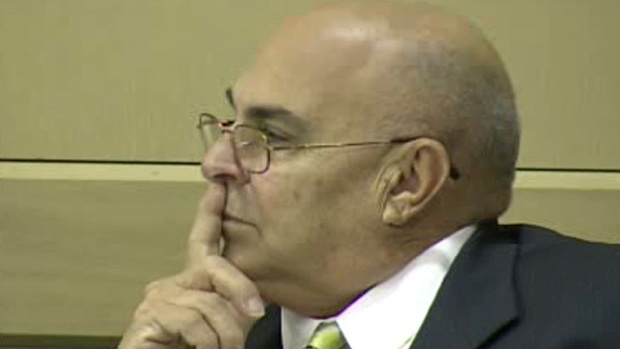 FORT LAUDERDALE, Florida -- Anthony "Big Tony" Moscatiello was sentenced Thursday to life in prison without parole for the mob-connected 2001 slaying of a prominent South Florida businessman during a battle over control of a fleet of gambling ships.

Broward County Circuit Judge Ilona Holmes imposed the sentence after a jury rejected the death sentence sought by prosecutors following more than three hours of deliberation. Holmes said she had little choice but to follow the jury's advice.

Moscatiello, 76, showed no reaction when the jury's decision was announced. He was convicted in July of murder and murder conspiracy in the fatal shooting of Konstantinos "Gus" Boulis during a dispute over lucrative gambling ships. Trial evidence showed Boulis was shot by a hit man hired by Moscatiello, a reputed member of New York's Gambino crime family once headed by "Teflon Don" John Gotti.

Just before he was sentenced, however, Moscatiello made a short statement to Holmes denying any role in the killing and contending that the hit man identified by prosecutors is not the actual killer. Moscatiello turned in the courtroom to address Boulis nephew Spiro Naos.

"I truly am sorry about what happened to Gus, but I assure you I had nothing to do with it," he said.

Naos said in a statement that the verdict and sentence was "fair and just."

"It has been almost 15 years since Gus was taken from us, but we can now move on with our lives in a manner in which Gus Boulis would be proud," Naos said.

Boulis, 51, was slain on Feb. 6, 2001, during a struggle for control of the SunCruz Casinos fleet, which he had sold to businessman Adam Kidan and his partner, former Washington lobbyist Jack Abramoff. Kidan was paying Moscatiello and Ferrari thousands of dollars each month to handle security and other services -- payments that would end if Boulis regained control.

Boulis, who also founded the Miami Subs restaurant chain, was fatally shot by hit man John "J.J." Gurino as he sat in his car in downtown Fort Lauderdale. Cars blocked Boulis in from front and back, with Gurino firing the fatal shots from a black Mustang that pulled up to the driver's side. Gurino was later killed in a dispute with a Boca Raton delicatessen owner.

Assistant State Attorney Brian Cavanagh urged jurors in a closing argument to recommend the death penalty for a crime he called a cold-blooded murder orchestrated by Moscatiello to protect his SunCruz profits.

Moscatiello attorney Sam Halpern, however, told jurors that the death penalty should be reserved for the worst killers -- terrorists, serial killers, those who slay children -- and that Moscatiello would be punished enough by living out his days behind prison walls with no chance of parole.