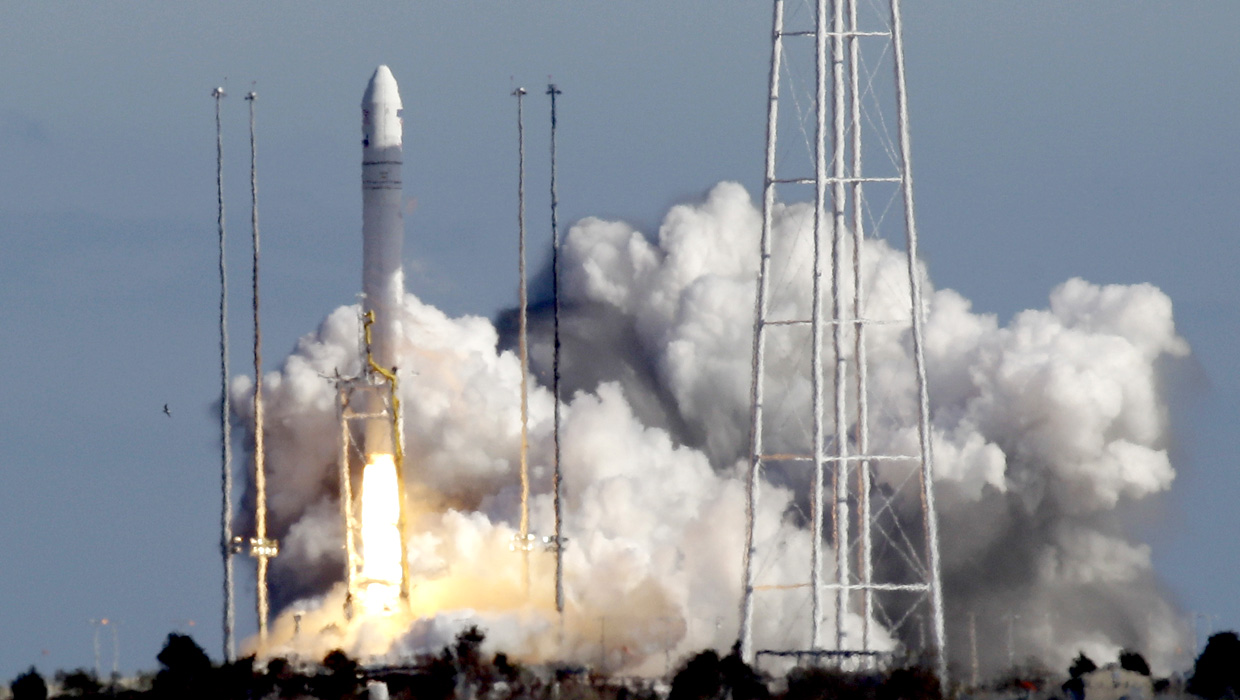 A new rocket built as a commercial venture by Orbital Sciences Corp. blasted off from the Virginia coast and streaked into space Sunday, chalking up a picture-perfect maiden flight that sets the stage for space station cargo delivery missions starting later this year.

"It's certainly was an amazing achievement for Orbital today, a great day for NASA, and another historic day for commercial spaceflight in America," said Alan Lindenmoyer, manager of the space agency's Commercial Crew and Cargo Program.

After a smooth countdown, the 133-foot-tall Antares rocket roared to life with a rush of flaming exhaust at 5 p.m. EDT (GMT-4). Two seconds later, after final engine health checks, the booster climbed away from launch pad 0A at the Mid-Atlantic Regional Spaceport adjacent to NASA's Wallops Island Flight Center.

Running four days late because of a technical glitch last Wednesday and bad weather Friday and Saturday, the Antares booster put on a dramatic afternoon show as its two main engines, gulping a ton of liquid oxygen and kerosene fuel per second, pushed the 600,000-pound rocket skyward with 750,000 pounds of fiery thrust.

Carrying an 8,300-pound instrumented mockup of the Cygnus cargo carrier Orbital plans to use for space station resupply missions, the Antares climbed straight up from its seaside launch pad and then arced away to the southeast, visible from eastern North Carolina, Virginia, Washington DC, Maryland, Delaware, New York and beyond, clouds permitting.

With its first-stage thrust barely exceeding the weight of the rocket, space enthusiasts had more time than usual to enjoy the view.

The Antares climb-out appeared glacial compared to boosters equipped with solid-fuel boosters, with the vehicle taking eight seconds to reach a velocity of 40 mph and 20 seconds to reach 100 mph. The space shuttle, in contrast, weighed 4.5 million pounds at launch but reached 100 mph in less than 10 seconds.

But as the Antares consumed its load of first-stage propellant it steadily accelerated, passing through the speed of sound at an altitude of about 30,000 feet in about 75 seconds.

Three minutes and 50 seconds after liftoff, the two first-stage engines shut down as planned at a predicted altitude of about 70 miles and a velocity of around 9,850 mph. The first stage then fell away and a solid-fuel second stage motor, built by Alliant Techsystems, ignited to continue the push to space, burning for another two minutes and 35 seconds.

Spectacular views from an on-board "rocketcam" showed the motor's fiery exhaust against the deep black of space with the limb of the Earth below.

The ATK Castor-30B motor burned out at an altitude of about 160 miles after boosting the second stage to a velocity of nearly 17,000 mph.

"Antares performance is nominal," said an Orbital Sciences engineer monitoring telemetry from the rocket. "Antares is in orbit."

Two minutes later, the dummy payload was released from the Antares second stage to complete the test flight's primary objective. The Cygnus mockup is expected to re-enter the atmosphere and burn up in about two weeks.

"All the events occurred within a second or so of when we expected them," said Frank Culbertson, a former shuttle commander who is now an Orbital vice president. "We didn't really see any major anomalies at all, so we're very happy with the sequence of events.

"We will obviously go in and analyze it much more carefully in the coming days and replay everything to make sure we get maximum information from the data," he added. "But at first glance, it all looks really good."

Space station commander Chris Hadfield congratulated the launch team, telling flight controllers in Houston "that's super, that's great news, good for them. Congratulations to all concerned. That bodes well for all of our futures. Super!"

Assuming analysis of telemetry from the rocket confirms good performance, Orbital should be clear to proceed with a so-called "demonstration" flight in June or July, this one using a Cygnus cargo capsule that will carry about a ton of equipment and supplies to the space station.

"I cannot say enough about the Orbital team, this was your mission," he said. "And you all demonstrated you could do it. ... Today is an incredibly historic day."

John Holdren, White House science advisor, said in a statement the successful test flight "demonstrates an additional private space-launch capability for the United States and lays the groundwork for the first Antares cargo mission to the International Space Station later this year."

"I congratulate Orbital Sciences and the NASA teams at Wallops, and look forward to more groundbreaking missions in the months and years ahead," he added.

The Antares rocket and Cygnus cargo carrier represent a critical link in NASA's long-range plan to ensure a steady flow of supplies and equipment to the space station in the wake of the space shuttle's retirement.

With the space shuttle's retirement looming, NASA set up the Commercial Orbital Transportation Services, or COTS, program in 2006 to encourage, by partially funding, development of unmanned cargo craft that would be procured by the government on a commercial basis.

Orbital Sciences won a contract valued at $1.9 billion for eight resupply flights to the station to deliver 20 tons of cargo. Another $288 million ultimately was budgeted for development, the Antares test flight and the demonstration mission planned for this summer.

Space Exploration Technologies, or SpaceX, holds a $1.6 billion contract with NASA to provide 12 cargo flights to the station for delivery of more than 44,000 pounds of equipment and supplies. A separate $396 million contract covered initial test flights.

SpaceX was first off the pad, successfully launching its Falcon 9 rocket with a dummy payload in 2010. SpaceX then launched two test flights, sending company-built Dragon cargo ships to the station, and two operational resupply missions, the most recent flight in March.

SpaceX builds the Falcon 9 rocket and Dragon cargo craft in house with company-designed engines, tanks and other hardware. Orbital Sciences took a more traditional approach, using components supplied by a variety of U.S. and international vendors to assemble the Antares and Cygnus cargo capsule.

The first-stage engines originally were developed for the Soviet Union's mammoth but ill-fated N-1 moon rocket and were stockpiled after the Russian moon program was terminated. Aerojet Corp. bought about 40 of the powerplants in the 1990s and modified them for use aboard U.S. rockets.

The Antares test flight marked the first time the modified Russian powerplants were used to help boost a payload to orbit.

"The two AJ26 engines that launched today's flight were originally slated to power the N-1 rocket on a lunar mission in the early 1970s," Pete Cova, Aerojet executive director, said in a statement. "Today's mission marks the first time these engines are reaching space, which is a significant milestone for both the U.S. and Russian companies involved."