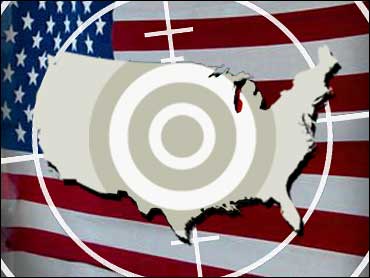 U.S. officials believe Canadian arrests over the weekend and three recent domestic incidents in the United States are evidence the U.S. will soon be hit again by a terrorist attack. Privately, they say, they'd be surprised if it didn't come by the end of the year, reports CBS News correspondent Jim Stewart in a CBS News exclusive.

The first of the domestic incidents, all of which drew little attention at the time, began with the holdup of a string of Torrance, Calif. gas stations last summer. Muslim converts who bonded together in prison planned to use the robberies to finance attacks on 20 Army recruiting stations.

Los Angeles Police Chief William Bratton admits they stumbled on the plot during a search.

"Make no mistake about it," Bratton said. "We dodged a bullet here — perhaps many bullets."

Police in Toledo, Ohio, busted another cell in February. This one consisted of three men training to attack U.S. forces overseas. Once again, luck played a role. When they tried to enlist someone in their mosque to help, he turned them in.

"These individuals are often hiding in plain sight in cities like Torrance and now Toledo," says John Pistole, a FBI deputy director.

Two months ago, a pair of Atlanta men, one a Georgia Tech engineering student, were arrested not long after communicating by e-mail with two of the suspects arrested in Canada over the weekend. The Atlanta men are charged with videotaping domestic targets, including the U.S. Capitol and the World Bank.

Analysts now conclude similarities between all the cases were dramatic: All were self-financed, self-motivated, and in each case the men were seeking out others to join their cell.

In short, Osama bin Laden didn't pay for these plots, recruit for them or even know of them. They were all totally homegrown — even amateurish. But if four, including the one in Canada, have been uncovered in just 11 months, officials fear there are inevitably other plots that have not been and are maturing even now.

The next attack here, officials predict, will bear no resemblance to Sept. 11. The casualty toll will not be that high, the target probably not that big. We may not even recognize it for what it is at first, they say. But it's coming — of that they seem certain.