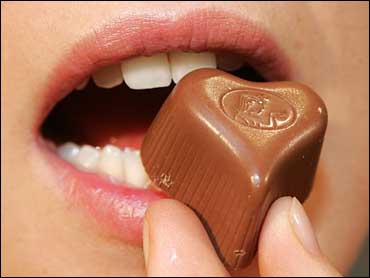 Leave it to the Dutch to help demonstrate the health benefits of chocolate.

A study of older men in The Netherlands, known for its luscious chocolate, indicated those who ate the equivalent of one-third of a chocolate bar every day had lower blood pressure and a reduced risk of death.

The researchers say, however, it's too early to conclude it was chocolate that led to better health. The men who ate more cocoa products could have shared other qualities that made them healthier. Experts also point out that eating too much chocolate can make you fat a risk for both heart disease and high blood pressure.

``It's way too early to make recommendations about whether people should eat more cocoa or chocolate,'' said Brian Buijsse, a nutritional epidemiologist at Wageningen University in The Netherlands, who co-authored the study.

Still, the Dutch study, supported by grants from the Netherlands Prevention Foundation, appears to be the largest so far to document a health effect for cocoa beans. And it confirms findings of smaller, shorter-term studies that also linked chocolate with lower blood pressure.

The findings, published in Monday's Archives of Internal Medicine, are based on data collected for more than a decade on Dutch men who were ages 65 and older in 1985. The long-running Zutphen Elderly Study has been used by other researchers to look for risk factors for chronic disease.

This time, researchers examined the eating habits of 470 healthy men who were not taking blood pressure medicine. The men who ate the most products made from cocoa beans including cocoa drinks, chocolate bars and chocolate pudding had lower blood pressure and a 50 percent lower risk of death.

Cocoa beans contain flavanols, which are thought to increase nitric oxide in the blood and improve the function of blood vessels.

``This is a very important article providing epidemiological support for what many researchers have been observing in experimental models,'' said Cesar Fraga of the University of California Davis, who does similar research but was not involved in the new study.

Buijsse noted the men eating the most cocoa products were not heavier or bigger eaters than the men who ate less cocoa.

Could the study results apply to women?

``Our study consisted of elderly men,'' Buijsse said. ``If you look at the other interventional studies, you see the same effects in men and women, younger people and older people. It may be the findings are generalizable to women, but you never know.''