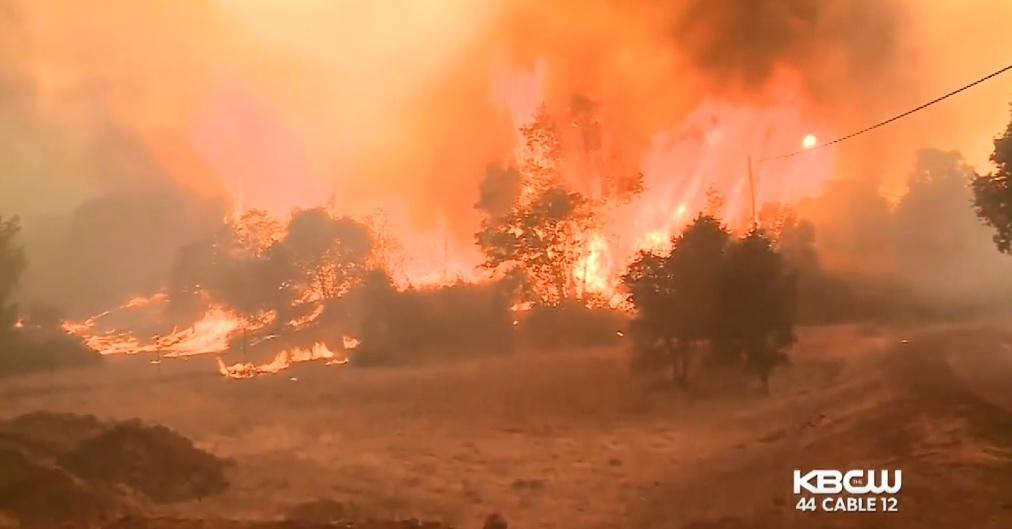 CLEARLAKE, Calif. -- A utility worker was killed near a Northern California wildfire as crews working in sweltering conditions battled multiple blazes, including twin fires that exploded in size and forced hundreds more to evacuate rural communities, officials said Sunday. He was the ninth person to die in the rash of blazes burning in the state.

The Pacific Gas and Electric employee was fatally injured in a vehicle-related accident Saturday on the western edge of the Carr Fire in Shasta County, utility spokeswoman Melissa Subbotin said. Jairus Ayeta, who was in his 20s, worked as an apprentice lineman and was part of a PG&E crew working in "dangerous terrain" to restore power, she said.

Ayeta is the seventh person to die in the immense blaze that has been burning for two weeks near Redding, where armies of firefighters and fleets of aircraft continue battling the flames about 100 miles south of the Oregon state line. Two firefighters and four residents, including two children, were also killed. The fire was more than 40 percent contained Sunday.

Meanwhile to the south, new evacuations were ordered Saturday evening near twin fires burning in Mendocino and Lake counties across wilderness on both sides of Clear Lake. Dry, hot winds fueled both blazes, which have collectively charred nearly 400 square miles of brush and timber. The entire so-called Mendocino Complex Fire is now one of the largest on record in the state, officials said.

Evacuations were ordered in neighboring Glenn and Colusa counties, including an area just east of the boundary of Mendocino National Forest.

Temperatures will remain hot all week across much of the state including Southern California, where red flag warnings for increased fire danger are in place.

Cal Fire officials said they were nervous because the state has seen so much destruction from fires when it's only the first week of August, reports CBS San Francisco. Half a million acres have burned and 45,000 people have been evacuated across the state of California.

Gov. Jerry Brown on Saturday toured Redding neighborhoods wiped out by flames and called on President Trump to help California fight and recover from the devastating wildfire season.

"The president has been pretty good on helping us in disasters, so I'm hopeful," said Brown, a Democrat. "Tragedies bring people together."

On Sunday, Mr. Trump tweeted Sunday that the wildfires hitting California are "being magnified & made so much worse by the bad environmental laws which aren't allowing massive amount of readily available water to be properly utilized." Trump said the water is being diverted into the Pacific Ocean.

The president also called for clearing trees to stop the fires from spreading.

Some areas on the fire's southeastern flank in Redding were reopened to relieved residents.

The Carr Fire, which incinerated 1,067 homes, started with sparks from the steel wheel of a towed-trailer's flat tire, Department of Agriculture and Fire Prevention officials said.

The fire burned slowly for days before winds suddenly whipped it up last week and drove it quickly through dry brush and trees.

It burned so furiously on July 26 that it created what is called a fire whirl. The twirling tower of flame reached speeds of 143 mph, which rivaled some of the most destructive Midwest tornados, National Weather Service meteorologist Duane Dykema said. The whirl uprooted trees and tore roofs from homes, Dykema said.

There are at least 18 major fires burning throughout California, authorities said. In all, they have destroyed hundreds of homes and killed nine people - including two firefighters assisting in a wildfire near Yosemite National Park.

On Sunday, the National Park Service announced that parts of Yosemite National Park will remain closed indefinitely because of growing fires in areas near and on the park. The park service says the parts of Yosemite that will remain closed include Yosemite Valley, El Portal Road, Wawona Road, Big Oak Flat Road, Glacier Point, the Mariposa Grove of Giant Sequoias, the Merced Grove of Giant Sequoias, Wawona Campground, Crane Flat Campground and Tamarack Campground.

The fire started Wednesday near the east side of Donnell Lake, the Bee reported. Strong winds pushed the fire northeast Saturday, and it had grown to about nine square miles as of Sunday afternoon with no containment, according to U.S. Forest Service officials.

The California Highway Patrol closed Highway 108 eastbound at Eagle Meadow Road and westbound at Dardanelle Resort on Saturday because of the fast-growing fire, which is burning in steep and rough terrain in the Stanislaus National Forest, according to the newspaper. A mandatory evacuation order was issued for the area, including all campgrounds and homes, the Bee reported.