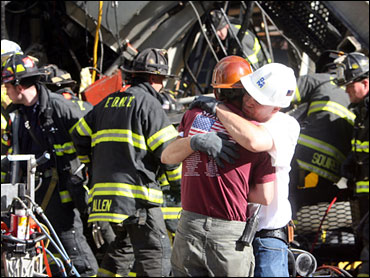 Two construction workers were killed and a third is fighting for his life after a crane collapsed at a construction site in New York City Friday. It was the second such collapse in less than three months, leaving many New Yorkers questioning the city's commitment to safe building practices and wondering how this could have happened again.

Last month the city's buildings commissioner resigned, under fire over a rising number of deadly construction accidents that have left more than 26 construction workers dead in the past year.

Since then, the city has added extra inspections at building sites and required that its staff be on hand whenever the towering cranes were raised higher, a process known as a jump. But on Thursday, just a day before the newest accident, the city reversed that rule, allowing crane jumps without the presence of inspectors.

It started out as an ordinary morning rush hour in New York City Friday, the streets crowded with people heading to work. Then, something went terribly wrong.

A crane being used in the construction of an apartment building suddenly collapsed. The 30-year-old operator and another construction worker were killed. And for New Yorkers, this disaster was all too familiar, CBS News Correspondent Kelly Wallace reports.

As smoke billowed from the street, residents ran for their lives. A home video, provided exclusively to CBS News, captured the moments after the massive crane literally broke apart. Crashing down, and smashing into a 23-story apartment building across the street. Brandee Chylinski lives on the 7th floor.

"The whole building just shook," Chylinski said. "I had a couple of pictures falling off the wall, I initially thought it was an earthquake, and then of course, the next thing in my mind was 9/11."

It is the second fatal crane collapse in New York City in less than three months. In March, seven people were killed when a crane demolished a four-story townhouse. After that incident, the city's inspector was arrested on charges of falsifying records. The building commissioner was forced out, and officials re-inspected cranes at every job site, but not this one, since it wasn't erected at the time.

This is the latest incident in a series of crane mishaps around the country. Last week, a crane collapse in Weston, Mo. killed one construction worker. In Ingleside, Texas, two cranes collapsed last month leaving one man dead. And in March, in Miami, a collapse killed two construction workers.

Franklin Ramos, who witnessed today's crane collapse, told CBSNews.com's Scott Conroy about the moments of terror as the towering structure came down.

Send your photos and video of the NYC crane collapse to CBSNews.com

Video from the scene showed the upper-floor balconies of the apartment building were severely damaged and a hole extended several stories down the side of the building. The mayor said seven buildings were evacuated as a precaution.

One body was brought out of the rubble, placed on a gurney and covered in a white sheet. A construction worker knelt over the stretcher, gently stroking the sheet.

Police Commissioner Ray Kelly said the injured workers were in serious condition at New York-Presbyterian Hospital/Weill Cornell Medical Center. One was being treated for a chest wound, the other for cardiac arrest, he said.

Construction foreman Scott Bair identified one of the injured as Simeon Alexis and said he was taken to the hospital with his "chest slashed open."

Bair said the collapse occurred after he left the construction site to get an egg sandwich a block away. He ran back, took a roll call of his 40 workers and discovered Alexis was missing.

"Everyone was shook up and crying," he said. "These are some hardened men, but they were crying."

Chaos enveloped the largely residential neighborhood of town houses and apartment high-rises as dozens of emergency vehicles raced to the scene during the morning rush hour.

"This is totally mind blowing," Manhattan borough President Scott Stringer told WCBS-2. "It looks like a bomb exploded in Manhattan. It's just a total tragedy."

Robert Lopez, manager of a Duane Reade pharmacy on the ground floor of the building that was hit, said he was 10 feet from the window when he heard "a big boom."

"Everybody was yelling and running and calling 911," he said. When he looked out again, he saw part of the crane had landed just feet from the window where he had been standing.

(CBS)
The general contractor on the project is Leon D. DeMatteis Construction Corp. of Elmont on Long Island. Spokesman Don Miller said Friday that Sorbara Construction, a subcontractor, was in charge of operating the crane. A woman who answered the telephone at Sorbara Friday said no one was available to comment.

The neighborhood, not far from the mayor's official residence, Gracie Mansion, has undergone a construction boom in recent years, with high-rises swiftly replacing older, low-rise brownstones.

Full of bars and casual restaurants, the neighborhood is populated with a mix of retirees, students and young professionals. Until recently, it had been considered one of Manhattan's more affordable neighborhoods.

Cranes at the site had generated several complaints in the neighborhood, including reports that safety barriers were breached and heavy loads passed over the heads of pedestrians, according to city building department records.

Inspectors found that most of the concerns were unwarranted, but they did temporarily order one crane at the site to stop all work on April 23 for not having the proper permit and for operating the crane in an unsafe matter.

Building Department records also said officials halted work after a crane on the site failed a "load test" on April 22. The crane passed a second test, however, the next day, and no violation was issued.

In a March 15 accident about 2 miles to the south, contractors building a 46-story condominium near the United Nations were trying to lengthen a crane when a steel support broke, killing seven people. A four-story town house was demolished and several other buildings were damaged.

A buildings inspector had found the crane to be safe a day before the collapse; another inspector resigned after his arrest on charges of lying earlier about inspecting the same crane.