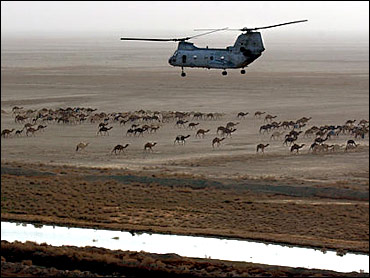 The Pentagon says a Marine Corps transport helicopter has crashed in central Iraq near Karbala with at least four people aboard.

So far, there are no signs of survivors.

A Pentagon official says another servicemember drowned while trying to rescue the crew of the downed helicopter.

The Marine C-H-46 Sea Knight helicopter crashed into a canal southeast of Karbala. A Pentagon spokesman says there's no indication of whether it was downed by hostile action.

The Sea Knight is a workhorse helicopter used by the Navy and Marine Corps to move cargo or troops. It normally operates with a crew of four and has been in service for more than three decades.