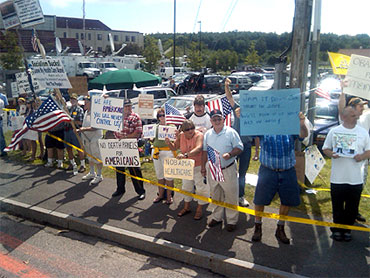 (CBS / Kimberly Dozier)
PORTSMOUTH, N.H. -- They lined up on both sides of the road to Portsmouth High School -- several hundred opponents, fairly evenly divided, for and against health care reform. The common denominator was volume.

"You're gonna bankrupt this country," shouted Sam Cataldo, of Farmington, NH. "We don't need Obama and his crew telling us how to die."

Another protester held up a sign saying "no death panels for Americans." He was referring to one of the proposals (not yet passed) which would offer senior citizens the option to seek reimbursement for advice on how to fill out a living will.

"They're ignorant," said a stonemason on the opposite side, who was explaining how he couldn't afford $1,000 a month healthcare payments. He'd just been diagnosed with a long-term illness, so he was stuck.

"I need help," he said, behind dark sunglasses and looking very much like a guy not accustomed to asking for help.

It was a scene the president will only see on TV -- his motorcade came a different route for safety. It's just as well, it seems to me, considering there was only a narrow two-lane gauntlet separating the two sides of protesters, the police keeping them apart with yellow tape and stern glares.

There was even a section set aside by the police for those carrying concealed (or unconcealed) weapons. It was populated by at least one man proudly showing his pistol off, proving he was exercising his right to bear arms, though I'm told he didn't have much of an opinion on the healthcare debate. Can't imagine the Secret Service okaying driving the president anywhere past that.

None of the rancor outside found its way inside, though a couple self-identified Republicans did, who said they had some hard questions for the President. But they asked them respectfully -- none of the shouting the White House had partly feared, and partly welcomed, as showing open disrespect to a sitting president in a public forum could have played into the message war in a win-win way for the White House.

As it was, President Obama had to actively seek tough questions from the crowd -- and never really got any go-for-the-jugular types like I heard from the crowd outside. Best quote, in Mr. Obama's attempt to refute reports of that the House healthcare plan would institute aforesaid "death panels"?

"The rumor that's been circulating a lot lately is this idea that somehow the House of Representatives voted for "death panels" that will basically pull the plug on grandma because we've decided that we don't -- it's too expensive to let her live anymore," he said, adding shortly after, I'm not for that.