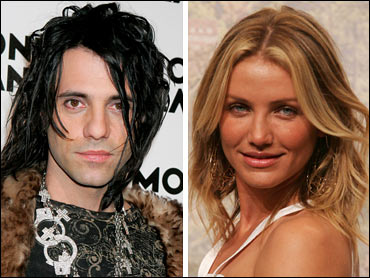 Criss Angel started out being coy about his relationship with Cameron Diaz. At first he told the AP, "Look at me. Do you really think she would have any interest in a guy like me?" The old non-denial denial.

But after surviving a stunt to plug the new season of his A&E show "Mindfreak," Angel dedicated his escape to his girl, Cameron. Then he said, "I love you baby. Have a safe trip to Europe for your 'Shrek' tour."

So is there really a relationship there? "I just said that because everyone was hounding me about it and at the end of the day I got it out there, so my professional life is there, my personal life is here," Angel tells People magazine. For her part, Diaz isn't saying anything.

Angel performed a stunt in New York's Times Square where he was suspended in a glass cube 40-feet above the ground. He had 24 hours to make his way out before it came crashing down.

Angel, 39, and Diaz, 34, were spotted hanging out in Las Vegas earlier this month, which initially sent tongues wagging.

"We're friends, we're good friends," Angel said during a press conference call May 31 to promote his show. "She's an amazing person and I'm honored to call her my friend. She's very dear to me, she's great."