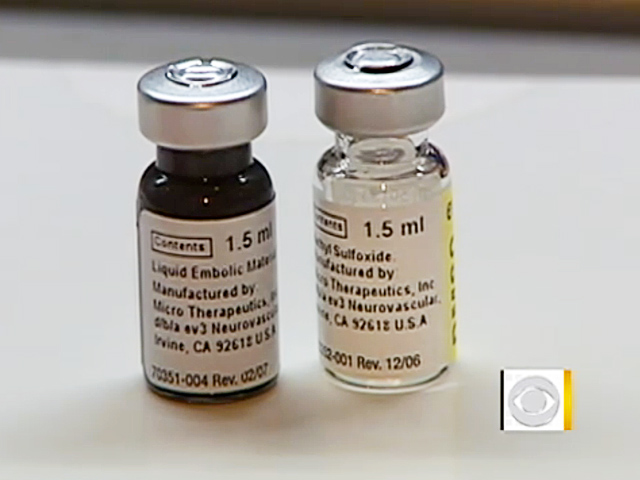 (CBS) Doctors and patients are bursting with excitement over an innovative new treatment for aneurysms - those potentially deadly weakened portions of blood vessel walls.

It did for Col. Amy Bechtold. The Air Force judge survived tours in Bosnia and Afghanistan but nearly died after a bad case of ringing in the ears led her to seek medical care, which revealed an aneurysm in her brain. Her neurosurgeon, Dr. Christopher Koebbe, said she needed immediate surgery.

"The danger of an aneurysm is that it could rupture, causing a massive brain hemorrhage," he told CBS News. "If that were to happen, there would be a 50 to 60 percent chance that a patient would die or be disabled from that hemorrhage."

Death and disability from ruptured aneurysms affect 25,000 people each year, according to the Brain Aneurysm Foundation.

How does the glue work? Doctors pump it to the brain via a catheter inserted in the groin. Upon reaching the aneurysm, the glue solidifies, strengthening the blood vessel wall to keep blood from leaking out.

"This is a great advancement," Koebbe told CBS News. "We can basically fill the aneurysm from the inside out."

It's fast too. In Bechtold's case, the procedure took less than an hour.

"To have brain surgery and go home the day after," she said, "to me, that is mind-boggling."