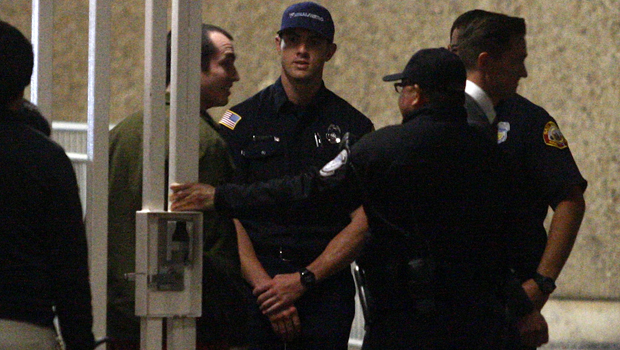 SAN DIEGO -- After seven months behind bars in a Mexican jail on federal weapons charges, a U.S. Marine veteran is finally back on American soil, returning to Miami Friday morning.

"It's a victory for American veterans," said former New Mexico Gov. Bill Richardson, who had talked to Mexican officials to urge them to release retired Marine Sgt. Andrew Tahmooressi on humanitarian grounds. "It's a victory for the United States."

Mexican officials found three loaded weapons and ammunition in the back of Tahmooressi's pickup truck as he crossed into Mexico March 31.

A Mexican judge on Friday called for Tahmooressi to be freed because of his mental state and did not make a determination on the illegal arms charges against the Afghanistan veteran diagnosed with post-traumatic stress disorder, according to a Mexican official who had knowledge of the ruling but was not authorized to give his name.

Tahmooressi has said he took a wrong turn on a California freeway that funneled him into a Tijuana port of entry with no way to turn back. His detention brought calls for his freedom from U.S. politicians, veterans groups and social media campaigns.

"It is with an overwhelming and humbling feeling of relief that we confirm that Andrew was released today after spending 214 days in Mexican Jail," the family said in a statement.

U.S. Republican and Democratic politicians had held talks with Mexican authorities to urge his release. A U.S. congressional committee also held a public hearing to pressure Mexico to free him.

U.S. Rep. Ed Royce, R-Calif., chairman of the House Foreign Affairs Committee, said he was "elated" by the news and that his PTSD will be treated by specialists in the United States. He had met with Tahmooressi in jail and talked to Mexico's Jesus Murillo Karam about the case.

"As I said after visiting Andrew in the Mexican jail, he needs to come home to the United States to be with his mother Jill and the support network of friends I know to be standing by to help him. He is a hero who served his country bravely on the battlefields of Afghanistan, which is why so many Americans have been focused on getting him home," Royce said.

Richardson, who grew up in Mexico and has negotiated on a range of international issues, said he met with Tahmooressi in jail in the border city of Tecate.

"I respect Mexico's judicial process, and I am pleased that Andrew was released today and will return home to his family," Richardson in a statement.

"As a mother, my heart is with Jill Tahmooressi tonight and I can only imagine the many emotions she must be experiencing, namely the relief in knowing her son is coming home and that they will soon be reunited without prison bars, without handlers and without unnecessary travel," Wasserman Schultz said. "It is my hope that Andrew can transition back to life in the U.S. after this ordeal as soon as possible, including securing the treatment he needs for his post-traumatic stress disorder and being honored for his service to our nation."

Mexican authorities, however, had made clear that they would not be influenced by politics and that the matter was in the hands of its courts.

In Mexico, possession of weapons restricted for use by the Army is a federal crime, and the country has been tightening up its border checks to stop the flow of US weapons that have been used by drug cartels.

His attorney, Fernando Benitez, had pushed for the 26-year-old Florida man to be released because Mexico has no experience in treating combat-related PTSD, even in its own soldiers.

Benitez had argued that Tahmooressi carries loaded guns with him because his weapons, which were bought legally in the U.S., make him feel safer. He added that the veteran is often distracted, which could have contributed to him becoming lost.

Tahmooressi was carrying in his truck a rifle, shotgun, pistol and hundreds of rounds of ammunition.

After being jailed in Tijuana, Tahmooressi's mother said, he tried to kill himself by cutting his neck with a shard from a light bulb in his cell because the guards and inmates threatened to rape, torture and kill him and he feared she would be in danger.

He was transferred to another prison, where a pastor visited him regularly and the Mexican government says he was under medical observation.

But a psychiatrist hired by Mexican prosecutors to examine the Afghanistan veteran agreed with the defense that he should get PTSD treatment in the United States, noting in a Sept. 30 report that Tahmooressi, who now serves in the Marine reserve, feels like he is constantly in danger.

Tahmooressi did not admit wrongdoing, and he still maintains his innocence, his attorney said.

His mother, Jill Tahmooressi, has said her son's time in a Mexican jail has been worse than his two tours in Afghanistan.

Tahmooressi left Florida for San Diego in January to get help after dropping out of college, unable to concentrate or sleep, his mother said.

The case marks one of the first times Mexico made a ruling on PTSD - though the psychological wound is increasingly used in U.S. courts, especially in arguing for reduced sentences.