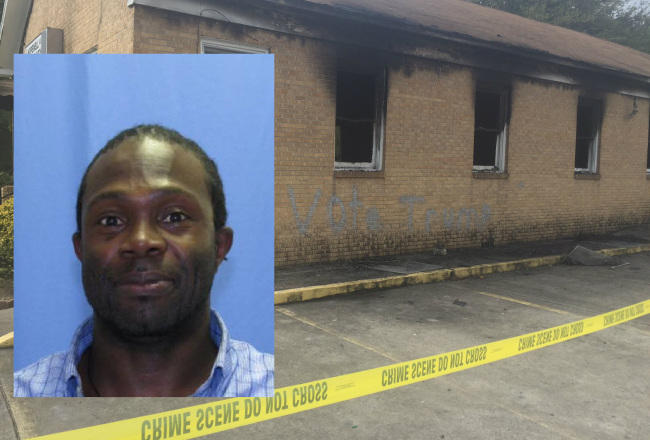 GREENVILLE, Miss. -- An African-American man charged in burning of a black church that was also spray-painted with “Vote Trump” has been falsely accused, his attorney said Thursday.

Andrew McClinton, 45, is charged with first-degree arson of a place of worship. Hopewell Missionary Baptist Church, where he was a member, was burned and vandalized Nov. 1, a week before the presidential election.

Police have not publicly said what led them to charge McClinton.

He has been jailed since Dec. 21 and chose not to appear for a preliminary hearing Thursday before Greenville Municipal Judge Michael Prewitt. The judge sent the case to a grand jury and reduced McClinton’s bond from $250,000 to $100,000.

“We just want to believe Mr. McClinton is innocent and that Mr. McClinton has not done anything they alleged he has done,” his attorney, Daniel Morris, said outside the courthouse.

The church is in Greenville, a Mississippi River port city and hub of commerce in the cotton-growing Delta. About 78 percent of the city’s 32,100 residents are African-American.

Mississippi Insurance Commissioner Mike Chaney, who is also the state fire marshal, said he believes the fire and vandalism were not politically motivated. He has not elaborated.

Morris said he thinks McClinton will be indicted, given the national attention the case has received.

“As everybody knows, you can indict a ham sandwich, so it’s not going to be that hard - even though they have nothing we’ve seen from the discovery, nothing that says Mr. McClinton had anything to do with it,” Morris said.

Morris said he expects McClinton to post bond and be released from jail.

McClinton lives in the Greenville suburb of Leland. Mississippi Department of Corrections records show he spent several years in prison for armed robbery and other crimes.

Morris said he has known McClinton’s family for a long time.

Hopewell was founded in 1905 in the heart of an African-American neighborhood, and the congregation has about 200 members. Some walls of the beige brick church survived the fire, but the remaining walls were torn down. Rebuilding could take months. On Thursday, the only things left on the small lot where the church used to stand were a white steeple and a black iron bell.

Since the fire, Hopewell members have been worshipping in the chapel at First Baptist Church of Greenville, a predominantly white congregation that says Hopewell can stay as long as it needs a home.