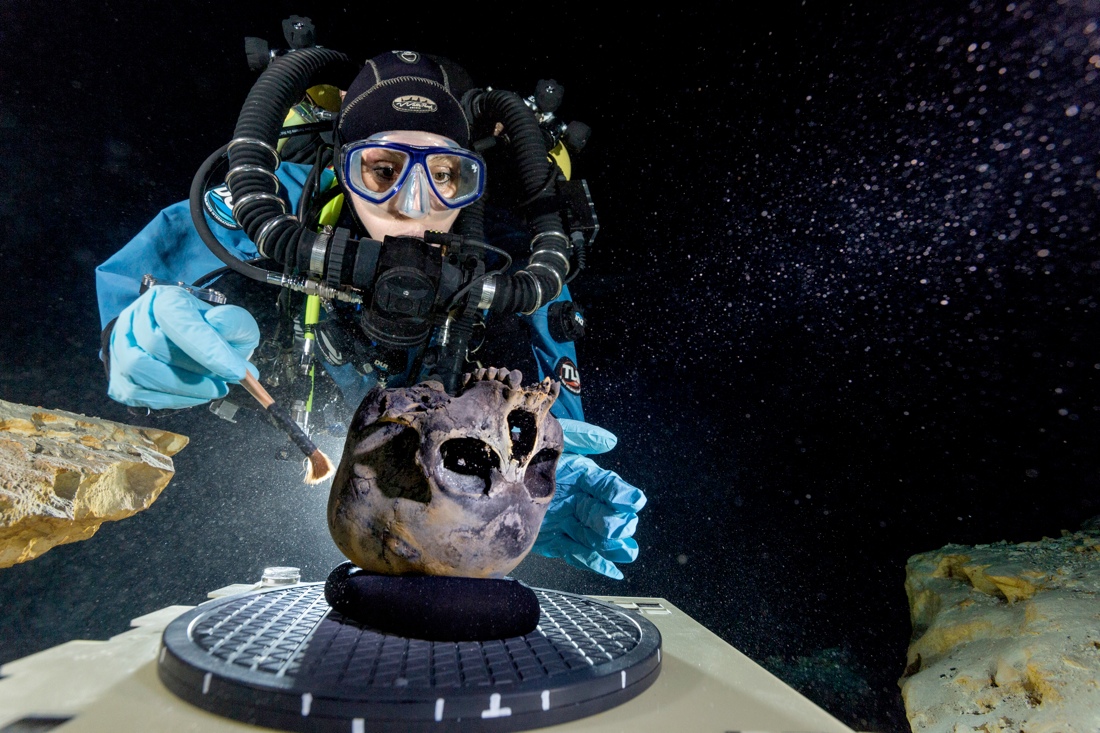 The ancient skeleton of a teenage girl found in an underwater cave in Mexico may be the missing link that solves the long-standing mystery behind the identity of the first Americans, researchers say.

The newfound skeleton was named "Naia," after Greek water spirits known as naiads. The bones are the nearly intact remains of a small, delicately built teenage girl who stood about 4 feet 10 inches (149 centimeters) tall and was about 15 or 16 years old at the time of her death, based on the development of her skeleton and teeth. [See Images of the Ancient Human Skeleton Discovery]

Naia reveals that despite any differences in the face and skull between the earliest Americans and modern Native Americans, they were, in fact, significantly related, probably deriving from the same gene pool.

"Naia is a missing link filling in a gap of knowledge we had about the earliest Americans and modern Native Americans,"lead study author James Chatters, owner of Applied Paleoscience, an archaeological and paleontological consulting firm in Bothell, Washington, told Live Science. Chatters is best known for his work on Kennewick Man, an ancient skeleton found in Kennewick, Washington, in 1996, whose origins were debated, because his skull was markedly different from those of modern Native Americans.

Naia was hidden in a deep submerged pit known as Hoyo Negro. This underwater chamber is reachable only by divers in the Sac Actun cave system, a web of flooded tunnels beneath the jungles of Mexico's Eastern Yucatán Peninsula.

"Hoyo Negro is a more than 100-foot-deep (30 meters), bell-shaped, water-filled void about the size of a professional basketball arena deep inside a drowned cave system," Chatters said. "Only technical cave divers can reach the bottom. First they must climb down a 30-foot (9 m) ladder in a nearby sinkhole. Then they swim along 200 feet (60 m) of tunnel to the pit rim before making a final 100-foot (30 m) drop. The divers are the astronauts of this project; we scientists are their mission control."

Divers first discovered Hoyo Negro in 2007 during their exploration of underwater caves in the region. "We had no idea what we might find when we initially entered the cave, which is the allure of cave diving," said study author Alberto Nava of Bay Area Underwater Explorers in Berkeley, California. "The moment we entered the site, we knew it was an incredible place. The floor disappeared under us, and we could not see across to the other side."

"We pointed our lights down and to the sides -- all we could see was darkness," Nava recalled. "We felt as if our powerful underwater lights were being destroyed by this void, so we called it 'Black Hole' (a cosmic object that absorbs all light), which in Spanish is Hoyo Negro." [Photos: The 7 Longest Caves of the World]

Naia was found in 2007 buried alongside the bones of beasts such as saber-toothed cats, coyotes, pumas, bears, sloths and bobcats. "It is like a miniature version of the La Brea Tar Pits, only without the tar and with better preservation," Chatters said. "It is a time capsule of climate, and plant, animal and human life at the end of the last ice age." (Located in Los Angeles, the La Brea Tar Pits hold the world's richest deposits of ice age fossils.)

The scientists think Naia and the animals fell into this cave long ago and died in this "inescapable natural trap," as the investigators called it. As glaciers worldwide started melting about 10,000 years ago, the cave filled with water -- sea levels were as much as 360 feet (120 m) lower then.

Based on direct radiocarbon dating of tooth enamel and indirect uranium-thorium dating of flowerlike crystalline deposits on Naia's bones, the researchers suggest her remains are 12,000 to 13,000 years old. This hinted that she could help reveal a long-standing controversy regarding the mysterious relationship between the earliest Americans and modern Native Americans.

Genetically, modern Native Americans resemble Siberians. This suggests that modern Native Americans are the descendants of people who moved between 26,000 and 18,000 years ago into Beringia, the landmass that once connected Asia and North America and is now divided by the Bering Strait. These people then migrated southward into North America sometime after 17,000 years ago.

Who were the first Americans?

However, despite widespread support for the idea that the earliest Americans are the ancestors of modern Native Americans, the ancestry of the first people to inhabit the Americas was long debated, because the face and head features of the oldest-known American skeletons do not look much like those of modern Native Americans. [Human Origins: How Hominids Evolved (Infographic)]

All in all, the earliest Americans more closely resemble modern peoples of Africa, Australia and the Southern Pacific Rim. "This has led to speculation that perhaps the first Americans and Native Americans came from different homelands, or migrated from Asia at different stages in their evolution," Chatters said.

Moreover, it has been very difficult unearthing intact skeletons of the earliest Americans that might help resolve this controversy.

"Paleoamerican skeletons are rare for several reasons," Chatters said. "The people themselves were few; they were highly nomadic and seem to have buried or cremated the dead where they fell, making the locations of graves unpredictable; also, geologic processes have destroyed or deeply buried their graves."

To help solve the puzzle regarding the origins of the first people to reach the Americas, Chatters and his colleagues retrieved Naia's skull from Hoyo Negro. This operation was complicated by how divers who visited Hoyo Negro without authorization had almost knocked Naia's skull into a deep chasm.

"The floor of that cave is a mess, littered with boulders, some of which are room-sized, and the skull could have dropped another 5 meters (16 feet) into a gap where there would have been no room for a diver," Chatters said. "The area is now fenced off."

Moreover, "the divers had never picked up Naia's skull before, so we didn't know how strong it was," Chatters recalled. "We were praying that it would not just shatter in their hands. It turned out, she's as solid as a rock."

Naia's skull had the face and head features one would expect of the earliest Americans. To learn more about Naia's potential links to modern Native Americans, the scientists extracted DNA from her upper right wisdom tooth. They focused on genetic material from her mitochondria -- the powerhouses of the cell, which possess their own DNA and get inherited from the mother. People have far more copies of mitochondrial DNA than chromosomal DNA, making it easier for researchers to study. [Top 10 Mysteries of the First Humans]

"We tried a DNA extraction on the outside chance some fragments might remain," Chatters said. "I was shocked when we actually got intact DNA.

"We were lucky to find a tooth that did not have an opening in the crown, so DNA still happened to be inside," Chatters added.

This DNA from her molar revealed that Naia possessed genetic mutations common to modern Native Americans. This genetic signature is found only in the Americas, probably first developing in Beringia after populations there split from Asians.

"This project is exciting on so many fronts -- the beautiful cave, the incredibly well-preserved animal skeletons, the completeness of the human skeleton, the success of our innovative dating approach," Chatters said. "But for me, what is most exciting is that we finally have an answer, after 20 years, to a question that has plagued me since my first look at Kennewick Man -- 'Who were the first Americans?'"

"These discoveries are extremely significant," said study author Pilar Luna, director of underwater archaeology at Mexico's National Institute of Anthropology and History. "Not only do they shed light on the origins of modern Americans, they clearly demonstrate the paleontological potential of the Yucatán Peninsula and the importance of conserving Mexico's unique heritage."

The differences seen in the face and head between the earliest Americans and modern Native Americans are probably due to evolutionary changes that happened during or after the colonization of the Americas.

"The changes that make northernmost Native Americans look most like East Asian people are adaptations to cold environments -- for instance, a flatter face and lower nose means there are less parts of the body projecting out and potentially freezing off," Chatters said. "Afterward, evolutionary changes that were advantageous during the expansion into the Americas were not necessarily so advantageous after people settled down, so other traits came to dominate."

The researchers now hope to sequence Naia's entire genome. "Current technology permits this, but it will still be challenging," said study author Brian Kemp, a molecular anthropologist at Washington State University in Pullman.

The researchers also hope to find more skeletons that support their findings.

"You don't prove an argument based just on one example in science," Chatters said.

The scientists detail their findings in tomorrow's (May 16) issue of the journal Science.

Nick Dietz compiles some of the latest and greatest viral videos
Thanks for reading CBS NEWS.
Create your free account or log in
for more features.
View CBS News In
CBS News App Open
Chrome Safari Continue
Be the first to know
Get browser notifications for breaking news, live events, and exclusive reporting.