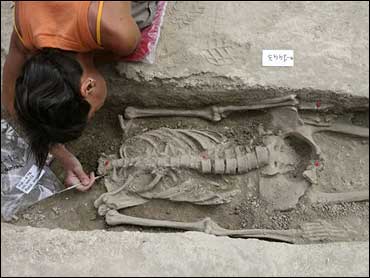 Archaeologists say they have dug up a woman skeleton dating to the 10th century B.C. in an ancient necropolis in the heart of Rome.

The well-preserved skeleton appears to be that of a woman aged about 30, said archaeologist Anna De Santis, who took part in the excavations under the Caesar's Forum, part of the sprawling complex of the Imperial Forums in central Rome.

An amber necklace and four pins also were found near the 5-foot-3-inch-long skeleton, she said Tuesday.

The bones, dug up Monday, would likely be put on display in a museum after being examined further, De Santis said.

It was the first skeleton to be found in the 3,000-year-old necropolis, she said. Early this year, a funerary urn that contained human ashes, as well as bone fragments that appeared to be from a sheep, were found in one of the necropolis' tombs.

Alessandro Delfino, another archaeologist who took part in the excavations, said Monday's discovery highlighted a "social change" in the funerary habits of the people who dwelled in the area, from incinerating to burying the dead.

Experts have said the necropolis was destined for high-ranking personalities, such as warriors and ancient priests, heading the tribes and clans that lived in small villages scattered on hills near the area that later spawned one of the world's greatest civilizations.