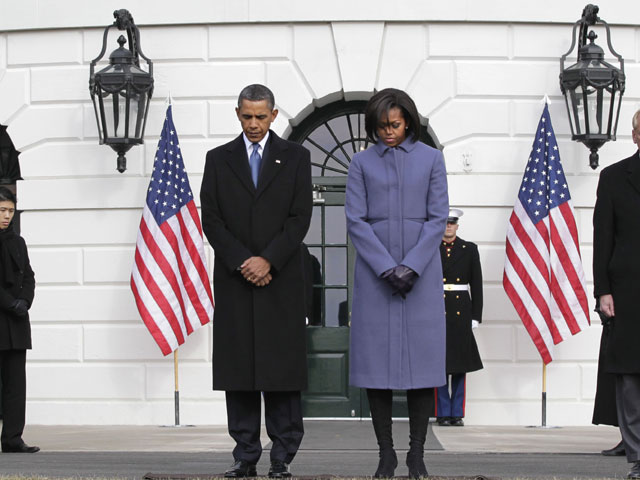 For the second time in his tenure, President Obama will eulogize the victims of a shooting. In November 2009--it now seems another era--he gave a small masterpiece of a speech in honor of the 13 people killed when Army Maj. Nidal Hasan allegedly opened fire at Fort Hood in Texas. When Obama speaks Wednesday night in Tucson, he will of course memorialize those killed and wounded when Jared Lee Loughner allegedly opened fire. He is at his best telling stories.

But Obama will also have to talk about tolerance. And he will have to find a way to talk about the need to civilize our debate when he is aligned with only one side in that debate.

Even addressing the idea of tolerance is going to close some ears. Conservatives will hear an accusation even if he says there is no connection between the shooter and Tea Party rhetoric. If there's no connection, why are you bringing it up--at a memorial service, of all places? Liberals who hear the president call out his own side will be irritated by the false equivalence. How can you compare us in any way to those people who say you hold office illegally?

Not long after the shooting, it became just another chapter in an ongoing fight. After the shooting, Markos Moulitsas tweeted, "Mission accomplished, Sarah Palin." Tea Party Nation founder Judson Phillips urged followers to blame the shooting on "the left." Anthropologists on either side looked for clues in the shooter's background to support their case that he was motivated by the ideology of the other side. Then, when the debate moved to a new phase, they traded facts from the past to attack or defend. The pattern of debate is not dissimilar to that which follows the release of cost estimates from the Congressional Budget Office.

This was a tragedy, yes. But it was also an opportunity. When you are engaged in a desperate fight with an opponent so outside the bounds of reason, a catastrophe like this is irresistible. It serves as the last word in the fight: See, conservative talk is dangerous. Or: See, liberals will immediately turn any tragedy into a political weapon regardless of the facts. Or, from the media: If you can make your point quickly, we would like to book you for our program. Sure, we want a reasoned debate, but not at the expense of speed. Better to be wrong, loud, and fast than slow and considered.

In the past, the president has tried to find a reasonable middle ground by illuminating how each side shares the blame. It's not clear how effective that is. Both sides are obsessed with magnitude. Sure, partisans may admit, we may jump to conclusions and mangle the facts to make our point--but the other sides does it more! That's not the issue. The issue is speed and lack of restraint. The president has the chance to make the case that the speed with which the old battle flared anew is proof that both sides have locked themselves into a self-perpetuating and unproductive cycle. Saturday's shooting did not create a pause in the confrontation--it accelerated it.

This is not just unhealthy; it's abnormal. How many Americans are actually engaged in this debate? Not as many as the number of comments on Sarah Palin's Facebook page would lead you to believe. Proof of that can be found in the lives of those who Obama will be in Tucson to mourn. Leave the anthropological inquiries into the mind of Jared Lee Loughner to the pundits. Obama can perform a valuable service by telling us more about the lives that were lost. Two of them were public servants: Judge John Roll and Gabe Zimmerman (who handled community outreach for Rep. Gabrielle Giffords). Three were retirees who had simply lived by the grace of their daily obligations--raising children, attending church, hating the snow back East. Mavy Stoddard believes that her 76-year-old husband, Dorwin, died because he shielded her with his body when the shooting started. Nine-year-old Christina Taylor wanted to be a politician.

This will serve as a welcome balance to the obsessive coverage of the shooter. It will also remind us of lives that are measured not by the number of arguments won or Twitter followers gained. All the president has to do to restore a little balance to this debate is talk about the people whose lives it did not define. In doing so, he will make the case for tolerance far better than any words directly aimed at the topic.

Are Assassins More Likely To Target Liberals?
If the Arizona gunman is too insane to be influenced by anyone, he's too insane to be executed.
Life after Loughner. John Dickerson is a CBS News political analyst. He is also Slate's chief political correspondent and author of On Her Trail. You can also follow him on Twitter here.