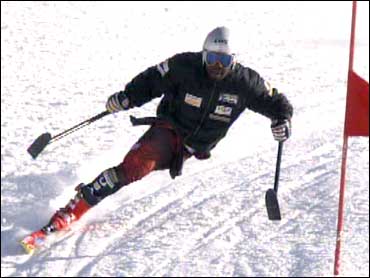 The uphill battle waged by a man named Ralph Green has led him quite literally to the top of his sport. And last week, we're proud to say, the story our Serena Altschul did about this New York City native received an Edward R. Murrow Award. Seems to us that both of them deserve an encore:

Imagine flying down a mountain at 70, 80, even 90 miles per hour. Ski racing is not for the faint of heart. It takes a rare combination of skill, courage, and … courage.

Consider then Ralph Green. He does it … with one leg.

"A lot of it is just balance, balance and angles and having fun, and not being scared to go fast."

"Oh my gosh, not being scared to go fast!?" Altschul exclaimed.

On the sunny slopes of Vail, Colo., there's no doubt Ralph's having fun as he gave Altschul some tips on the trails.

"I think you're doing pretty good," he said.

"The Paralympics are pretty much equivalent to the Olympics except most of the athletes have physical disabilities, which in some cases can limit us to compete against say, an able-bodied person," Green said.

"This winter Ralph and dozens of other athletes will train for a spot on the United States' Disabled Ski Team, and the chance to compete in the 2010 Paralympic Games in Vancouver, Canada.

America's Paralympians compete year-round, with almost no public recognition, which is a shame because this is a team to be proud of.

"The United States' is the best disabled team out of 28 nations," Green said.

"You know a lot of countries have some really, really good ski teams. But the United States has more athletes consistently in the top 10, top 15."

There's no question what Ralph Green can do on skis is remarkable. Perhaps the only thing more remarkable is what got him on skis in the first place…

Green grew up in the projects in Bedford-Stuyvesant, Brooklyn. It was a tough neighborhood, but he was good student and gifted athlete. At 15, he was quarterback of his high school football team.

"I wasn't gonna be one of those kids in the streets," he said. "My mom kept a foot in my butt when I was growin' up."

One night in the summer of 1992 Green and a friend were walking home from a cousin's apartment when they noticed they were being followed.

"I just happened to turn around, and I saw the gun out. I heard two shots. I was able to get a good look at him, you know, as he was pullin' the trigger. And the bullet went in my back, hit a branch of my aorta. Ricocheted off my pelvis and lodged into my intestines."

The bullet nearly killed him. The victim of a random shooting, Green lay in a coma for 3 months. After 28 operations, doctors were able to save his life, but they couldn't save his leg.

"Me bein' shot here, yes, it changed my life. I lost my leg and everything. But, you know, I can't sit back and, you know, worry about the past. I have to think about how can I make myself a better man for the future?"

An athlete at heart, Green tried several disabled sports, but nothing caught on until one day he was invited on a ski trip.

"Look around - this is Bed-Stuy, Brooklyn. Skiing was not on my radar at all growing up."

"I clicked my ski on, I felt like I was glidin', man. I had never felt it before.

"When you have two legs and you become disabled, you feel that a part of you is taken away. You feel that you may not be able to walk faster than the next person. You may not be able to ride a bike faster than the next person. But skiing is a level playing ground. It gives me that freedom. You know it lets me go just as fast as the average person on the hill, or ever faster."

In 2000, 8 years after the shooting, Green moved to Colorado, and set his sights on the Paralympics.

To finance his training, Green was accepted into the Home Depot program for Olympic athletes. He puts in 20 hours a week and gets paid for 40 with benefits.

"I went from being a gardener to working in the paint dept, and it's a great program."

That leaves him free to train, 4-5 hours a day, 140 days a year. He skis wherever and whenever he can, and when he's not on the mountain, chances are you'll find him talking to kids.

"I'm gonna start off by telling you guys how I was shot, because I see a lot of the younger guys when we first came in, they was like, 'Oh, he got one leg. I wonder what happened?' That's good! I'm glad you guys are inquisitive."

We caught up with Green at his old elementary school in Brooklyn. Once he gets past the story of the shooting, he moves on to the stuff he really came to talk about:

And Green is speaking from experience. Leaving the streets of Brooklyn for the posh resorts of Vail could have been a rough transition. But Green's at home in both worlds, with no negative vibes of racial tension.

"I never really experienced any type of racial tension or anything, in or outside of the field. And if I did then it flew by me. Now don't get me wrong. I get a lot of good looks. You know, people say, 'Wow! I see that brother skiing!' You know, but that's positive energy."

And positive energy is what he's all about, whether he's sking or simply spreading good will.

"I was just down there speaking with a person who's been skiing with one leg for 3 days, and if I can have any impact on that person's life, then I'm doing my job."

That's why whatever he does, whether he makes the Olympic team or not, something Green's grandmother once told him is never far from his mind:

As the ski race announcer says, "Let's give a big hand for Ralph Green!"