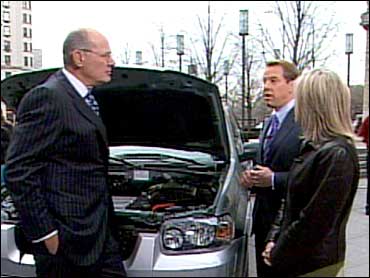 Driving in bumper-to-bumper traffic isn't only frustrating, it also wastes a lot of gas. But a new American SUV hybrid has been designed to be more fuel-efficient -- especially in stop-and-go traffic.

"We like to call it the no-compromise vehicle," says Bill Ford, chairman and CEO of Ford Motor Company on The Early Show. "It really is, because you can do everything you can with your normal SUV. And yet, you've got great fuel economy and very low emissions."

A hybrid is a car that has both a gas engine and an electric motor. The car is able to switch between the two motors with the passenger barely noticing.

Mary Ann Wright, who is the chief engineer on the Escape Hybrid project, explains to co-anchor Harry Smith how it works: "There is a gas engine that's supplemented with the transmission. It's not a traditional transmission in that it doesn't have gears. What it's always doing is finding the optimum point so you get great fuel economy. What's inside is the electric motor that allows you to propel on electric power only. So if the system is right, you go on electric only," she says.

Bottom line. she says: it drives like any other car. "You get in, put your seat belt on, turn the ignition, put it in gear, drive away." The rest, the SUV figures it out.

As for the gas mileage in city driving, Wright says, "It will be between 35 and 40 miles per gallon in the city cycle. On the highway, you get about 30."

The Escape Hybrid doesn't need to be plugged in at night in order to recharge its electric battery. It harnesses energy while it brakes, and uses that energy to recharge the batteries.

The other big advantage of the Escape Hybrid is that it runs cleaner. Its exhaust emissions are supposed to be significantly less polluting than those of a normal car.

And the price? "It certainly costs us more because it is new technology," Ford says. "We haven't priced it yet to the customer. There will be a premium, but not a huge one. We're hoping to get Congress to give us some tax credits for the customer, because we think that any new technology like this needs some encouragement from the government so we can get a lot of them on the road and get them out there early."

Asked for a ballpark figure of the premium would be, Ford says, "A couple thousand, roughly. But you'll save a lot in fuel, obviously. And like any new technology, you know, it does take some time to roll it out. Having said that, we have two other hybrids coming back-to-back. We have the Mercury Mariner, which is coming in two years. And then we have a mid-sized sedan, which we're going to have as a hybrid."