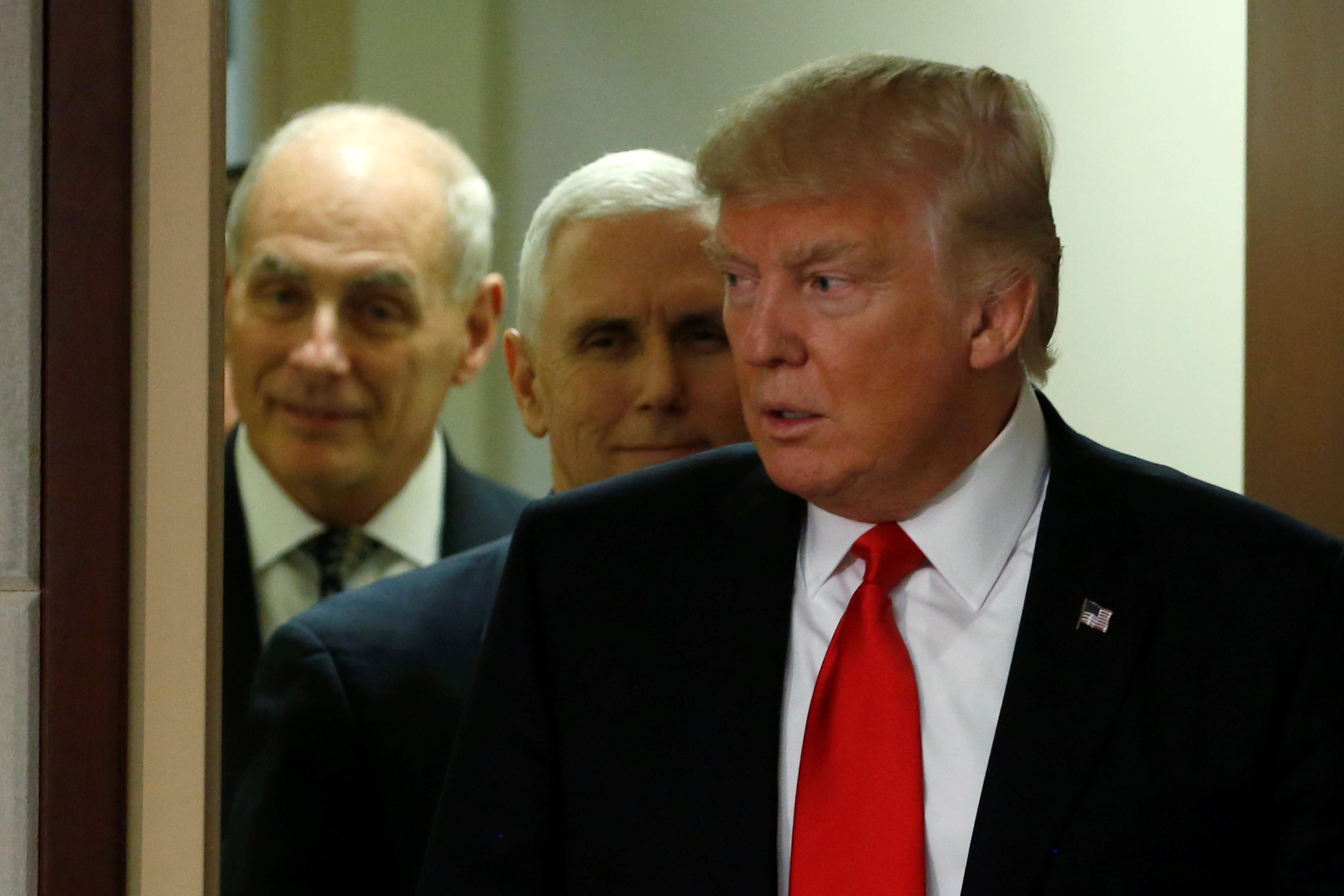 The United States has had a number of presidents who likely struggled with some form of mental illness. Abraham Lincoln, for example, endured bouts of “melancholy” so severe that today he would almost certainly be diagnosed with clinical depression. On the less extreme end of the spectrum, Richard Nixon and Jack Kennedy both took psychiatric medications while in office.

That brings us to our just inaugurated, famously colorful, and sometimes erratic new president, Donald Trump. And while there’s no way to say conclusively whether Trump is mentally unwell, there’s no shortage of detractors who insist he must be.

Regardless of whether Trump is suffering from some kind of mental ailment, the Constitution does provide a manual for what to do in case of presidential incapacity in the form of the 25th Amendment. In particular, a provision within Article 4 of the amendment lays out how a president can be forced to surrender his powers should he be ruled unable to fulfill his duties.

First, a little history. The question of what happens when a president is unable to fulfill his duties has been with us since the founding, and was originally addressed by Article II, Section I, Clause 6 of the Constitution, which mentions the vice president taking charge in case of presidential “disability.”

It was a vague standard, and likely vague on purpose. “What is the extent of the term ‘disability’ and who is to be the judge of it?” asked Delaware delegate John Dickinson during debate at the Constitutional convention.

The 25th Amendment, adopted in 1967, sought to answer that question. It is the longest amendment adopted since the Civil War, yet remains a bit obscure – in the aftermath of the assassination attempt on Ronald Reagan, many cabinet members were said to be unaware of its contents.

Article 1 of the Amendment states that the vice president will become president should the incumbent either die or resign, which was enacted when Nixon was forced from office and Gerald Ford took power. Article 2 allows a president to nominate a vice president in case of a vacancy of that position, which Ford used to name Nelson Rockefeller, who was then confirmed by Congress.

Article 3, which stipulates that the president can temporarily discharge his duties to the vice president, has also been used on several occasions, most recently in 2007 when George W. Bush underwent a colonoscopy and briefly transferred his powers to Dick Cheney.

Then comes Article 4, which has never been used. It stipulates how a vice president, together with a majority of the cabinet, can inform Congress that the president is “unable to discharge the powers and duties of his office.” Should that happen, the vice president becomes “acting president.”

Should that happen, Congress has 21 days after assembling to decide whether the president is well enough to discharge the duties of his office. A two-thirds majority in both houses is then required to remove the president and make the vice president the acting president.

This is complex, and for good reason: nobody wants a coup to take place under the guise of Constitutional government. But if Robinson and company are correct that Trump is “crazy,” it is plausible, although extraordinarily unlikely, that his own cabinet and vice president could give him the boot.

But proving the president is unstable would be enormously difficult.

If Mr. Trump were suffering from a physical ailment, and the White House physician testified to that fact, the matter would be relatively cut-and-dry. Mental illness, however, is a much more subjective matter.

“How do you demonstrate someone is psychologically unsound?” Robert Gilbert, a professor at Northeastern University and an authority on the 25th Amendment, told CBS News.

This is a question with no clear answer in the Constitution, and could invite a nightmare scenario of dueling teams of psychiatrists testifying before Congress, and in front of the world, about a president’s fitness to serve.

Whether the 25th Amendment was prepared to deal with the prospect of a mentally ill president became a topic after Reagan revealed his Alzheimer’s diagnosis in 1994. The following year, Jimmy Carter convened a symposium to discuss the issue, and offered his own recommendation: that a panel of preeminent physicians should be the ultimate arbiter of whether the president is incapacitated.

While conceding that Carter’s proposal had its merits, former Sen. Birch Bayh, who helped draft the amendment, argued that it was impractical. For one thing, as noted earlier, mental illness can be exceptionally difficult to diagnose. For another, there are questions at stake – political ones – that doctors are not qualified to make a determination.

“The vice president and the cabinet were given their responsibilities under the Twenty-fifth Amendment because they are personally familiar with whether or not the president is doing his job,” Bayh, an attendee at the symposium, wrote later in 1995.

“They are in a position to assess the alternatives and the gravity of the governmental circumstances at that time.”

Another reason Article 4 has never been invoked is how politically perilous it is for the people doing the invoking.

There’s a strong case the Article should have been used after the assassination attempt on Reagan, which briefly incapacitated him. But his vice president, George H.W. Bush, who was away at the time, never considered doing so, and for understandable reasons. “No vice president wants to be seen as someone trying to look like someone grasping for power,” Gilbert notes.

There’s a lesson there for Mike Pence, should he ever take a look at Article 4 and start thinking it might be wise to ascend to the presidency a little early: failing in that effort would end his career, not to mention the careers of the secretaries who sign up to help him. That alone is a powerful incentive to avoid using the law.

So while it’s plausible that this president could be removed from office for reasons of mental illness, it’s still exceptionally unlikely he would. And, in any event, Mr. Trump would have to get a whole lot weirder than he’s been already before anyone could start seriously thinking about Article 4.

“It would have to be very bizarre behavior by the president,” Gilbert says. “More bizarre than what we’ve seen.”

Defense Secretary says "conflict is not inevitable" in Ukraine
Will Rahn