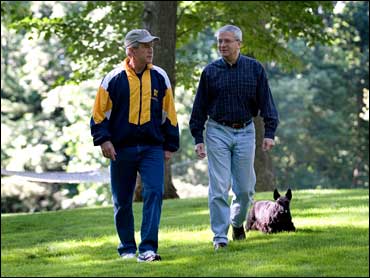 Doctors removed five small growths from President Bush's colon Saturday after he temporarily transferred the powers of his office to Vice President Dick Cheney under the rarely invoked 25th Amendment.

The polyps, extra tissue growing inside his large intestine, were found during a routine colon cancer scan performed at the Camp David presidential retreat.

"All were less than 1 centimeter (about four-tenths of an inch) and none appeared worrisome," White House spokesman Scott Stanzel said. Outside medical experts agreed.

They were sent to the National Naval Medical Center in Bethesda, Md., to be microscopically examined for signs of cancer. Results were expected in 48 hours to 72 hours. Polyps can turn cancerous, so finding them early is one of the best ways to prevent the disease and improve the odds of surviving it.

"The standard procedure is to remove all polyps that you see," said Dr. David Weinberg, director of gastroenterology at Fox Chase Cancer Center in Philadelphia, who was not part of the medical team at Camp David. "But the majority of polyps taken out that are less than 1 centimeter in size are very unlikely to have cancer in them."

During the procedure, doctors use a flexible probe — outfitted with a tiny camera at one end — to examine the patient's large intestine for any abnormal growths or bleeding, reports CBS News correspondent Joie Chen.

Bush invoked the presidential disability clause of the Constitution at 7:16 a.m. EDT. He transferred his authority to Cheney, who was at his home on the Chesapeake Bay in St. Michaels, Md., about 45 miles east of Washington.

Nothing occurred during the 2 hours and 5 minutes of the transfer that required Cheney to take official action, Stanzel said.

First lady Laura Bush was in Midland, Texas, celebrating her mother's birthday. The president spoke with her on the phone before and after the colonoscopy.

During the 31-minute procedure, Bush was sedated with a drug called propofol.

"The advantage is that it works faster and wears off considerably faster than the standard agents," Weinberg said. He said some other drugs can leave a person groggy for hours after a colonoscopy.

"The president was in good humor and will resume his normal activities at Camp David," Stanzel said.

For the general population, a colonoscopy to screen for colon cancer is recommended every 10 years. But for people at higher risk, or if a colonoscopy detects polyps, follow-up colonoscopies often are scheduled in three- to five-year intervals.

Doctors discovered that Bush had two polyps during a similar scan in 1998 and two more were found during a colon screening in 1999, while Bush was governor of Texas. That made the 61-year-old president a prime candidate for regular examinations. The screening done in 2002 revealed no polyps or abnormalities.

"The more polyps you have, the more frequent you need to have a colonoscopy," said Dr. Roshini Rajapaksa, a gastroenterologist at New York University Medical Center who was not involved in the exam. "But because they're small in size, it's not that worrisome even though he had five."

Given the war in Iraq and terrorist threats across the world, the president invoked Section 3 of the 25th Amendment "out of an abundance of caution," Stanzel said. The amendment, approved in 1967, four years after President Kennedy was assassinated, provides for the temporary or permanent transfer of presidential power in case the president is unable to fulfill the duties of the office.

It had been used only twice before.

In July 1985, President Reagan had colon cancer surgery and turned over power to his vice president, George H.W. Bush. During the president's colorectal screening on July 29, 2002, Bush relinquished powers to Cheney for more than two hours.

This transfer of power took place with letters Bush faxed to House Speaker Nancy Pelosi, D-Calif., and Sen. Robert Byrd, D-W.Va., president pro tempore of the Senate. Bush reclaimed his authority at 9:21 a.m. EDT with follow-up letters to both lawmakers.

"This letter shall constitute my written declaration that I am presently able to resume the discharge of the Constitutional powers and duties of the office of the president of the United States," Bush's one-paragraph letter said.