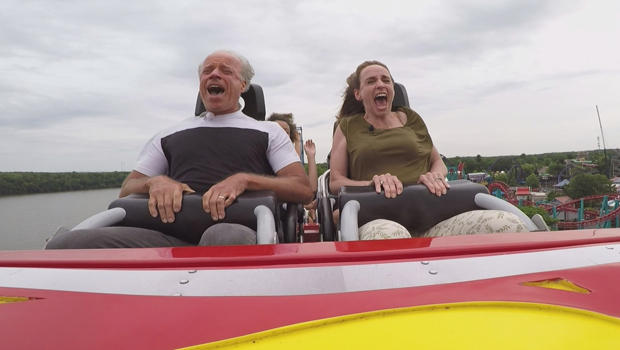 Many of today's young people -- older folks, too -- are attracted to a more extreme form of amusement, Faith Salie among them:

For decades amusement parks have been a staple of American summers. From the smells of fried sugar to stomach-churning rides, there is just something about them that brings out the kid in us.

Is there anything more fun than a roller coaster ride? "If it is, I haven't met it yet," laughed Arthur Levine, a travel writer and theme park enthusiast.

Each year more than 335 million people pack America's 400 amusement parks. But as much as we might consider a visit to one of these parks an American pastime, the world's oldest amusement park is in Denmark.

Nils Erik Winther is the director of Bakken, the world's oldest amusement park. Located in Dyrehaven.  Today the park is filled with traditional rides and games. But back when it was founded -- 434 years ago -- the original attraction was water. A natural spring attracted scores of nearby city dwellers, eager for fresh water. There was nothing else except "Trees, forest," said Winther.

Bakken inspired other cities to create their own escapist destinations, according to historian Jim Futrell.

"When the industry first started, it was in Europe in the Middle Ages when cities were just getting established," Futrell said. "They were dirty, they were crowded. So entrepreneurs started setting up what were called pleasure gardens on the outskirts of the cities, then as now, to provide an escape."

But America took this entertainment to new heights.

In 1893 the Ferris Wheel debuted at the first Chicago World's Fair, proving there was a market for more extreme entertainment.

"Originally, the amusement parks tended to be started by transportation companies on the outskirts of the city to generate ridership on the evenings and weekends," Futrell said. "But as those companies matured, they started selling off the parks to people who were operating it as their primary business rather than a sideline. And you saw the emergence of a global industry."

As the years advanced, so did technology. Rides became faster, bigger … with one ride rising above all the rest.

"From the very earliest amusement parks, roller coasters quickly emerged as being the signature attraction," said Levine. "You fast forward 100-plus years later, and it still is, by far, the most popular ride at the amusement park."

Why? "Well, because they're just so thrilling. They provide sort of a socially acceptable way to scream, and to just have a lot of fun."

So whether or not you think coasters are a scream, you have to admit amusement parks themselves have had quite the ride.

As Levine noted, a summer without a visit to an amusement park "is not a summer at all!"