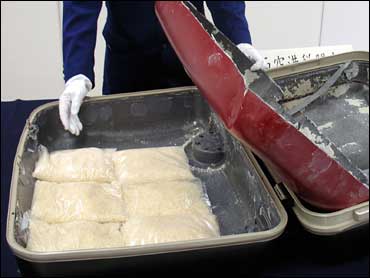 Demand for amphetamines, Ecstasy and other synthetic drugs appears to have stabilized in the West, but the problem is worsening in Asia and spreading to new markets in the Middle East, a U.N. report said Tuesday.

Manufacturing and trafficking of illegal stimulants is also getting more sophisticated, the U.N. Office on Drugs and Crime said in a 2008 assessment that pointed to the growing involvement of local and international crime syndicates.

Antonio Maria Costa, executive director of the U.N. agency, warned that amphetamine-type drugs are seen as "a cheap and available tonic for our fast and competitive times."

In North America and Europe, where pill-popping is largely recreational, demand has leveled off or even declined in recent years thanks to effective controls on the chemicals used to make them.

But in fast-growing developing countries, where the drugs are often used to boost stamina on assembly lines or to keep drivers awake behind the wheel, use is on the rise.

"The problem has shifted to new markets over the past few years," the U.N. report said, adding that, even so, production appears to have stabilized worldwide at about 551 tons (500 metric tons) annually.

The market, retail and wholesale, also has remained steady at around $65 billion since 2001.

Asia is still driving demand, with nearly half the region's countries reporting increases in methamphetamine use.

But the most dramatic shift has been in the Middle East, where seizures of amphetamine-type stimulants accounted for a staggering 25 percent of the global total in 2005-2006, up from just 1 percent in 2000-2001, the U.N. said.

The largest market in that region was Saudi Arabia, a trend apparently linked in part to a growing number of migrant workers, with more than 12 tons (11 metric tons) of amphetamines seized two years ago.

The surge in Middle East busts has resulted in a sharp drop in the global share of seizures in East and Southeast Asia, home to the most amphetamine users in real numbers, with its percentage of total seizures more than halving from 67 to 31 during the same period.

But there have been worrying changes in the type and scale of production in that region.

"A decade ago, synthetic drugs were a cottage industry," said Costa, pointing to recent seizures of industrial-sized clandestine laboratories.

"Now they are big business, controlled by organized crime syndicates that are involved in all phases of this illicit trade, from smuggling precursor chemicals to manufacturing the drugs and trafficking."

Countries where law enforcement is weak or where local officials are complicit are most selected as bases for such operations.

Europe, a longtime supplier of Ecstasy to global markets, meanwhile, continues to be the major source of that drug trafficked internationally, but its importance is diminishing as manufacturers shift to regions closer to their consumer markets, the U.N. said.

Clandestine labs are being discovered in Mexico and Canada, for instance, where they can readily supply users in the United States, and labs have also been found in Turkey and Bulgaria, the source of many of the drugs that end up in the Middle East.

Suppliers can quickly adapt to trends and cater to local markets because, unlike plant-based drugs such as cocaine or heroin, ingredients needed to make synthetics are readily available for legitimate industrial purposes.

"When one lab is shut, another opens," Costa said. "When one type of precursor chemical is unavailable, producers switch to an alternative."