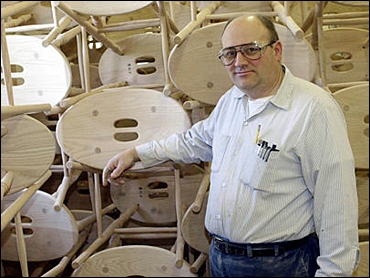 Although businessman Atlee Kaufman pays the state about $4,000 a year in workers' compensation premiums for his furniture parts store, he says he'll never make a claim. It's against his beliefs.

He and other members of the Amish religious group believe in taking care of one's own liabilities and that filing an insurance claim goes against Biblical principles of trusting in God.

Ohio lawmakers are finally listening. The state, like others with large Amish or Mennonite populations, is set to exempt members of religious sects from paying insurance premiums if it goes against their principles.

The Amish in Ohio, which number about 51,000, have sought the provision for at least a decade. It requires groups to have been a recognized religion since December 1950 and to have had a church program to cover members' insurance needs for "a substantial" number of years.

Both the state's House and the Senate have approved a bill with the new provision as part of the Bureau of Workers' Compensation two-year budget. Gov. Bob Taft is expected to sign it into law, said spokesman Orest Holubec.

Twenty-five of Kaufman's 28 employees at his 22-year-old business are Amish. He pays into a separate church aid fund to cover the cost of accidents, a practice followed by other Amish and Mennonite businesses.

The Amish and Mennonites both come from the Anabaptist religious tradition. The Amish dress simply, shun most technology and travel country roads in distinctive black buggies.

Mennonites often also dress simply but represent a broader range of beliefs. They are known for emphasizing a simple lifestyle and an opposition to war and, sometimes, military service.

Paul Gaus, a College of Wooster chemistry professor and author of three mystery novels about the Amish, said the Amish believe that taking out insurance "is really second-guessing God's will in your life."

"It's also regarded as a colossal waste of money," Gaus added. "These are very frugal people for the most part."

Other states with Amish or Mennonite populations vary in their practice.

Kentucky and Pennsylvania have similar exemption for employees of a "recognized religious sect." However, neither Michigan nor Indiana allow groups to seek such exemptions. Indiana lawmakers have struggled for years over whether to grant the exemption, said Sandy Fralich, a spokeswoman for the state Workers Compensation Board.

One issue "is the unfair advantage it gives the people that are exempt, because they're competing with people who have to buy insurance," Fralich said. "The other issue is secular versus non-secular, with the government trying to regulate something with someone's religion."

Some Ohio contractors oppose the measure on the same grounds.

"This option for some contractors is unfair, and unconstitutional as a violation of separation of church and state," Luther Liggett, an attorney representing the National Electrical Contractors' Association, said in a letter to the Senate Insurance Committee.

Contractors raised the same concerns last year over a provision that would have exempted religious groups from a requirement that commercial tradespeople, such as electricians or plumbers, carry liability insurance. That legislation died in committee.

Andy Raber, a spokesman for the Amish in Ohio, said his community's businesses bear a number of costs that others don't, such as hiring drivers to take them to work sites.