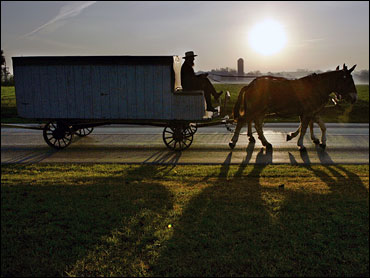 The Amish tend to shun the spotlight, so it can be difficult to get a window into their world. But after Charles Roberts, a 32-year-old milk truck driver, burst into an Amish schoolhouse in rural Pennsylvania on Monday, killed five schoolgirls execution-style and then shot and killed himself, the Amish have had to confront the outside world in a tragic way they never anticipated.

The Amish choose to live in a world that's isolated from modern conveniences, like cars and electricity — and from modern dangers. The Amish don't use electricity, don't have telephones and don't use computers. The essentially live as though they are still in the 19th century.

According to Dr. Donald Kraybill, who has studied the Amish extensively, there are about 200,000 Amish who live in 27 states and 350 geographical settlements. They came from Europe in the 17th and 18th centuries and have lived lives largely separate from mainstream American society ever since.

"It's a biblically based understanding of their way of life, and they seek to apply their unique ways in terms of their selective use of technology, the way in which they interact with the outside world," he told The Early Show co-anchor Harry Smith.

Elam Zook grew up and lived in the Amish community for nearly 30 years. He left about a decade ago.

"There's always a struggle of how much of the outside world should we accept or embrace or condone," Zook told The Early Show correspondent Tracy Smith. "There was the sense that you were protected," he said.

Aaron Meyers came to the United States from Europe and decided to live this very separate life — an idea that he said originates from the Book of Romans in the Bible which says "you should be in the world, not part of the world," he said.

Meyers owns a buggy company in Lancaster County, Pa. He is a member of a Plain sect, which is similar to the Amish in that they stay separate from mainstream culture.

"The principle originally was that you didn't have a wire coming into your farm because that would connect you up with the outside," he told Harry Smith. "It's very literal."

The Amish are opposed to commercial insurance and believe they should depend on each other, Kraybill said.

"They have tremendous networks of social support for mutual aid. Whenever there's a misfortune of some kind, the community rallies around," he said. "There's a large extended family network. The average Amish person will have 75 or 80 first cousins, many living within a few miles."

Another defining characteristic of the Amish is their pacifism. Zook says the principle of nonviolence means there's no armed school security — and that's unlikely to change, even after Monday's shootings.

"Security would mean some form of resistance," he said. "They cannot resist."

He compares what happened Monday to 9/11. Just as the world embraced America five years ago, there's that same sense of shared loss now.

Pastor Jim Davis' church is two miles from the school. The surrounding neighborhood is usually separated into the Amish and the English, but not today.

"The Amish community and the greater community, they're interconnected," Davis said. "What happens to one affects the other."

"We have a reason to reach out to each other," adds Zook. "I believe if we do that, we can survive this."

The act of violence against an Amish schoolhouse by an outsider has shaken the community to its core, Meyers said.

"It was a tremendous shock, and disbelief and then grief," he said. "And last night I began to notice that there were bands of people, bands of Amish people coming down this way to support the folks that had suffered this tremendous loss."

Because the Amish are pacifists, he said, they will see the school rampage as a test of faith. They will forgive the shooter and show compassion for his wife and children.

"There's strength and forgiveness and not having the kind of bitterness that we think possibly caused this terrible tragedy," Meyers said.