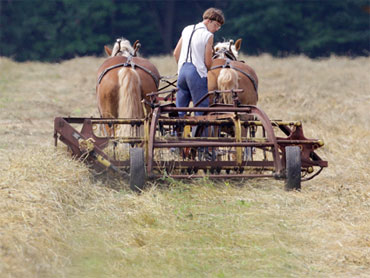 The search by the booming North American population of Amish for affordable, fertile farmland has produced settlements in 28 states and Ontario - and has even led parties to scout recently for suitable properties in Alaska and Mexico.

The study by the Young Center for Anabaptist and Pietist Studies at Elizabethtown College in Elizabethtown, Pennsylvania, found that about two-thirds of Amish still live in the traditional strongholds of Pennsylvania, Ohio and Indiana, but that they continue to spread west, particularly into the Midwestern corn belt.

"They are sort of challenging some of the mainstream assumptions about progress and how you achieve the good life and happiness," said Elizabethtown professor Don Kraybill, the study's director. "They're not merely surviving; they're thriving, and growing at this very rapid rate."

The highest rates of growth over the past year were recorded in New York (19 percent), Minnesota (9 percent), Missouri (8 percent), Wisconsin (7 percent) and Illinois (7 percent). High-growth areas for Amish in the past five years also include Kentucky, Kansas and Iowa.

The Amish are a devout Christian faith dating to the 1500s, and their ancestors began arriving in eastern Pennsylvania around 1730. They generally eschew modern conveniences such as motorized vehicles, instead relying on horse-drawn carriages and permitting only limited use of telephones and electricity. Practices can vary from group to group, but their plain dress and use of the Pennsylvania Dutch dialect make them distinct in modern society.

The study focused on all Amish groups that use horse-and-buggy transportation, so it excluded such automobile-driving groups as the Beachy Amish and Mennonites.

The newest state to get an Amish settlement is South Dakota, after a group of at least six families bought several farms near Tripp in the southeastern part of the state. They have planted forage for their cows, built barns and established a weekly bake sale.

"We put it in paper sacks for them, wrap it up really well," Weber said of the ice cream. "They say they have to get it home right away and eat this."

The remarkable growth is almost entirely due to the Amish birth rate - many Amish families have five or more children. Kraybill said the Amish retain about 85 percent of the young adults who have to decide whether to remain in the church. The Amish marry within the community, and the total number of converts nationwide is believed to be less than 100, he said.

About half the Amish are under 18 years old, meaning the community tends to focus much of its energy on young people and schools, Kraybill said.

Earlier this summer, a van of Amish land scouts from Prattsburg, New York, visited Alaska to seek a site for a new settlement but were unable to find anything suitable. Another group, from Illinois and Missouri, just made a return trip to Mexico on a similar mission.

Kraybill said there are no Amish congregations in Alaska or Mexico, although small numbers of Amish schoolteachers from Pennsylvania and Ohio have been helping improve education within an Old Colony Mennonite community in Mexico. That conservative Mennonite group has roots in Russia, rather than Switzerland and southern Germany, like the Amish.

The teachers' supporters produced a newsletter describing their experiences in Mexico, in an effort to raise money for the project.

In the new population study, Pennsylvania passed Ohio as the state with the largest Amish population, in part because the authors employed a more precise method to estimate the number, one that takes into account the different average size of an Amish district, or congregation, depending on the state.

The study says the Amish have targeted areas for new settlements judging by the quality and cost of farmland, the potential for nonfarm employment, a rural lifestyle, other factors conducive to their values and proximity to other Amish communities.