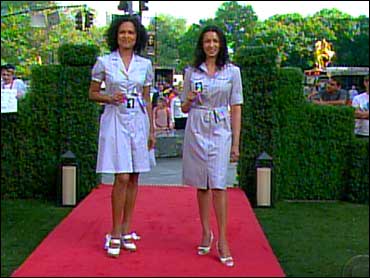 Dozens have hit the U.S. coast this past century. Some cost lots of money. Others cost lots of lives. Saturday Early Show correspondent Melinda Murphy takes a look at some of the worst storms on record.

Most are familiar with Hurricane Andrew, which slammed into the Florida coast in 1992. Andrew is the costliest hurricane on record.

John Gurney of the National Weather Service says, "Hurricane Andrew dwarfs all other storms we've had: $26 billion in damage by Hurricane Andrew, parts of Florida were devastated by that storm."

At $7 billion - about a quarter of the cost of Andrew, Hugo was the second most expensive storm in history.

But when everything is totaled, last month's Hurricane Charley will probably bump Hugo out of the No.2 position.

A hurricane's devastation isn't always measured in dollars. The costliest hurricane in lives happened in the year 1900 in Galveston, Texas. At least 8,000 people died.

Weather 2000 meteorologist Jeffrey Schultz says, "Before the day of computers before the day of satellites, hurricanes were able to gather up a lot of strength and almost come out of nowhere and without any warning, bringing along a storm surge, high winds and heavy rains and actually killed a lot of people."

The storm surge was responsible for the majority of those deaths, which is true of most hurricanes.

Gurney notes, "Historically, nine out of 10 fatalities have been related to storm surge. Storm surge is basically the rising of the water due to the hurricane's central pressure and also the winds pushing the water on shore."

High winds aren't as deadly as you might think. For example, 1969's Camille packed winds at a whopping 190 miles per hour. It was one of only three Category 5 hurricanes to hit the U.S. this century. Yet neither Camille nor Andrew rank in the top 10 for deadliest storms on file

Camille chewed through the Louisiana coastline - very unusual for a class 5 hurricane.

Storm historians think the Florida Keys 1935 Labor Day hurricane was perhaps the most intense hurricane ever - even though no wind measurements are available.

Most Category 4 and 5 hurricanes hit the U.S. in the earlier part of the century - that's because hurricanes build in decades-long cycles.

Gurney notes, "We're entering into a new active phase of hurricanes. We're going to see more intense storms and more frequent storm impacting the area over the next several decades."

A perfect example of that is this season. This August has the most number of named hurricanes and tropical storms since 1950 and the situation in Florida now is a first.

"This is the first time, really, that we're seeing two Category 4 hurricanes aim at one state within 30 days," Gurney says. "This is an unprecedented thing that's happening and could be a sign of things to come."

We're only half way through this year's hurricane season and have already had eight named storms - two more than in a traditional full season.