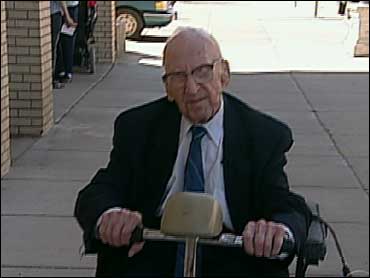 When Walter Breuning was born, he could expect to live 40-something years.

Then he did it again ... and now he's doing it a third time.

Lots of people, including Jay Leno, have wanted an interview with Breuning. But no one wanted to travel all the way to Great Falls, Mont., to get it -- and that was the deal.

That is except for CBS News correspondent Steve Hartman, who figured, at age 112, the Oldest Man In America deserved to have people come to him.

What makes Breuning such a sought after interview is that he can be interviewed.

Typically by the time somebody gets to be the oldest man or woman in America, they either can't hear you or they answer every question with some crazy non sequitur about yesterday's lunch. But Breuning still has every last marble. He still remembers his grandfather talking about fighting in the war -- the Civil War.

He's the only man left born during the Cleveland administration. He can say where he was when President McKinley got shot, and went to school when America was being led by Theodore Roosevelt.

Under Taft, he got a job working with the railroad, earning $2.50 a week. "How do you like that?" Breuning asks today.

He signed up to serve in World War I but never got called. And by the time World War II rolled around, he was already too old.

Walter was married for 35 years, but his wife Agnes been dead for more than half a century. They never had any kids - and he never took a second wife.

He now lives in an assisted living center, but needs no assistance. Once a week, weather permitting, he goes out and does errands.

"I go to the store and bank," he explains.

It wasn't necessarily Hartman's idea to get video of Breuning on his scooter for this story.

When he did, Breuning's friend Fred Feifer, a local weather man who set up the interview, helped save the 112 year old from rolling off the curb.

Apparently, bright sun blinds him. But other than that and some slight hearing difficulties, Breuning's in perfect health. He's not on any medicine and normally watches what he eats. He credits his longevity to diet.

Says Breuning, "You come back in 4 or five years and I think I'll be here."