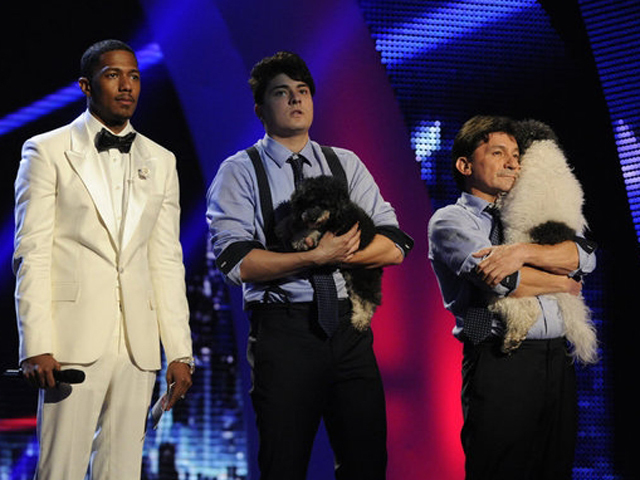 After weeks of competition, NBC's talent show finally narrowed down the pack to one lucky act on Thursday night. The two-hour season seven finale found six contenders competing for a $1 million prize and a show on the Las Vegas strip.

At the start of the episode, host Nick Cannon told viewers to settle in for an "insane night." The evening was full of performances, including appearances by Flo Rida, Ne-Yo, Justin Bieber and Blue Man Group.

The judges also reflected on the season.

"I never would have imagined when we started this journey together that here we would be with such incredible talent," said Howard Stern. "When we first started I said, 'I don't know. Are we going to find anybody?' But we've found some incredible people."

The evening featured a large array of talent from the finalists, ranging from comedy to a harp player and a dog act.

It came down to comedian Tom Cotter and Olate Dogs, an act that features two trainers and their furry companions. In the end, the dogs won; they will have their day in Vegas.

The crowd cheered, and judge Sharon Osbourne was so pleased, she rushed to the stage to give the talented pooches a hug.

Tell us: What did you think about the "America's Got Talent" finale?