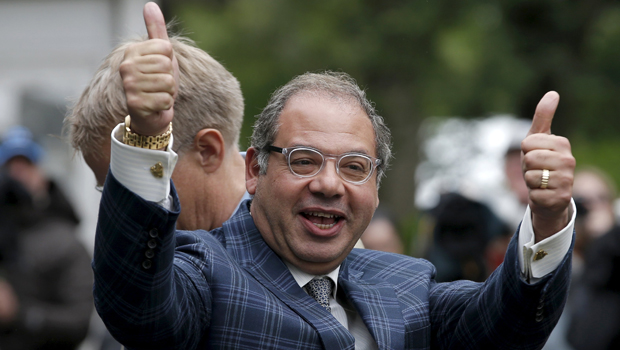 NEWARK, N.J. -- A judge threw out a lawsuit over $1.65 million in gambling debts against the owner of Kentucky Derby and Preakness winner American Pharoah on Thursday, clearing the issue days before the horse attempts to claim the first Triple Crown in 37 years.

A federal judge ruled the lawsuit against Ahmed Zayat was filed after a six-year statute of limitations had expired in New Jersey.

"Justice always prevails," Zayat said in a phone interview with The Associated Press. "I have said before these are all lies from A to Z. And the judge ruled in our favor. Could not have happened at a better time."

In horse racing's biggest week, Zayat's colt is chasing the first Triple Crown since 1978 when he races in the Belmont Stakes on Saturday.

According to court papers, Rubinsky and Zayat entered into a personal services contract in 2003 and Rubinsky said he advanced Zayat credit at a couple of casinos under the agreement that he'd be paid back.

Rubinsky claimed that by the end of 2005, Zayat owed him $2 million. Some has since been repaid. Zayat has denied owing Rubinsky the remainder of the money.

In his ruling, U.S. District Judge William J. Martini sided with Zayat's argument that Rubinsky's claim dated to 2005, when Rubinsky hired an attorney and investigator to recover the alleged debt. Rubinsky had said the claim dated to 2008, when he received text messages from Zayat that constituted a written promise to repay the $1.65 million. But Zayat explicitly said in his text messages that he doesn't owe money to Rubinsky or anyone else, the ruling said.

Joseph Bainton, Rubinsky's attorney, said he was assessing his options "regarding an opinion with which we respectfully disagree." Rubinsky could file an appeal to have Martini reconsider the decision, or file an appeal to the 3rd U.S. Circuit Court of Appeals.