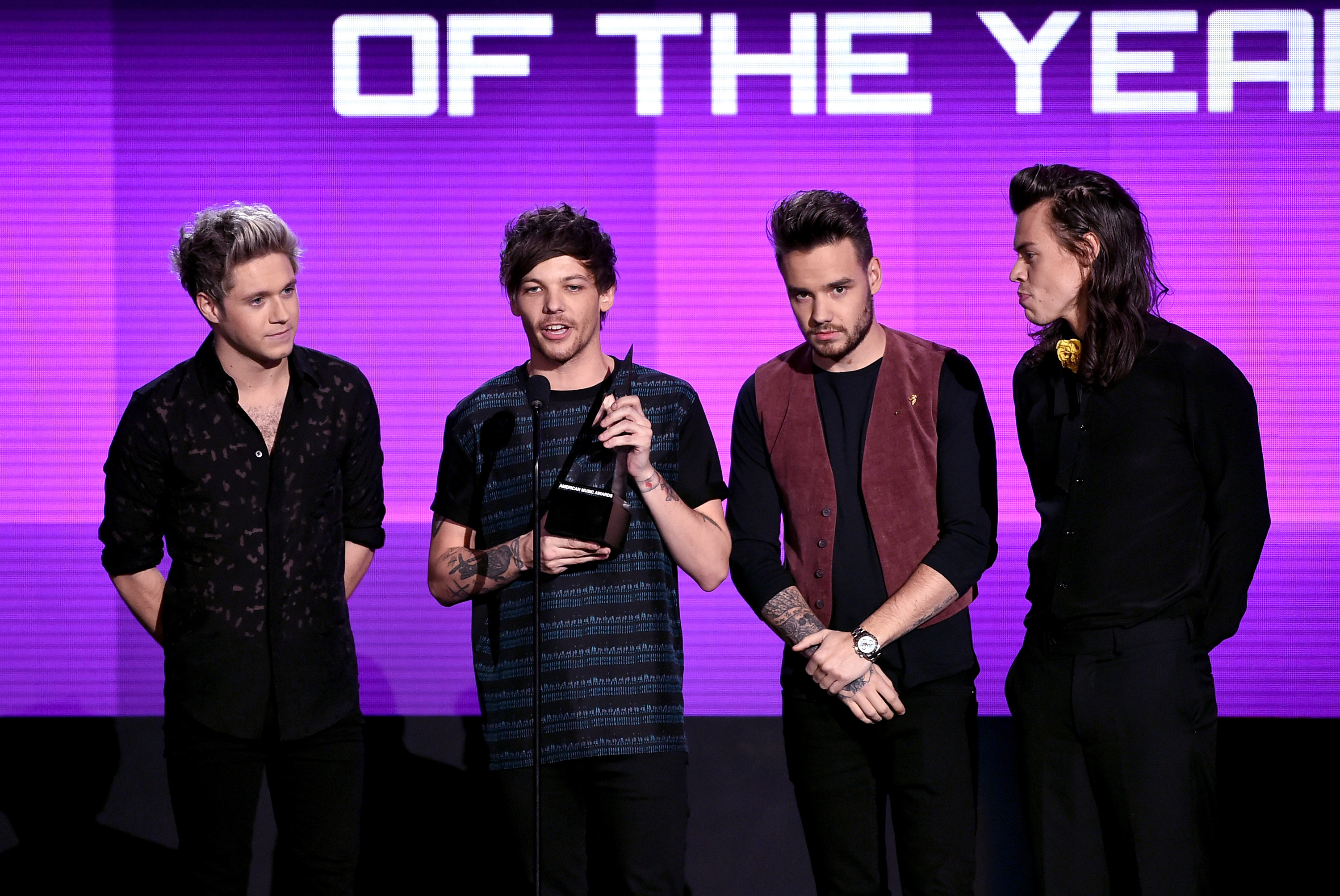 Music stars came out in droves to the Microsoft Theater in Los Angeles on Sunday for the 2015 American Music Awards, which saw big wins for The Weeknd, Nicki Minaj and One Direction.

One Direction scored the evening's biggest honor -- Artist of the Year -- at the fan-voted awards show. Niall Horan, Louis Tomlinson, Liam Payne and Harry Styles thanked fans for their support, calling the win "incredible." They also acknowledged their upcoming break from the group, which was announced earlier this year -- months after singer Zayn Malik revealed he was leaving the band.

Earlier in the evening, the boy band accepted Favorite Pop/Rock Duo or Group, marking the third consecutive time the British boy band scooped up the award. "Wow. To say that we have won this award for three years on a bounce is a pretty incredible thing to be able to say. It's as simple as this: we won't be able to do this without our fans," Horan said.

"Tonight's not about me; tonight's about the music," Jennifer Lopez, this year's AMAs host, said at the start of the night, before adding, "Do you want to dance with me?" J. Lo then showed off her dance skills with a routine that features some of the year's most popular songs, including tracks by Rihanna, Drake and Taylor Swift.

Prince handed out the night's first award: Favorite R&B/Soul Album -- which went to The Weeknd for "Beauty Behind the Madness," marking his first ever AMA trophy. "Make some noise for Prince, ladies and gentlemen," said The Weeknd, before thanking his team, along with his mom. "I love you, bye," he said prior to walking off the stage. Little did he know, he would be taking the stage again later to accept his second AMA -- for Favorite R&B/Soul Artist.

Luke Bryan picked up his fourth win in the Favorite Male Country Artist category. "This is amazing coming out here being in the room with so many amazing people," he said before thanking his wife for letting him do what he loves.

Country singer Sam Hunt walked away with the New Artist of the Year honor, topping the likes of Fetty Wap and Walk the Moon. "I'm proud to represent country music tonight," he said.

The Favorite Female Pop/Rock Artist winner was Ariana Grande. "Wow, I really have no idea what to say. I didn't think about what so say," she said fighting back tears. "Ew, I'm crying," she said. Grande also gave a shout-out to her "nonna" -- who was in the audience.

The members of Fall Out Boy walked away with the first AMA of their career, winning Favorite Alternative Pop/Rock Artist.

Music filled the night with early performances by Five Seconds of Summer, Selena Gomez and Carrie Underwood. Demi Lovato brought the crowd to its feet with a rousing performance of her new single, "Confident." Meghan Trainor and Charlie Puth showed off their vocal chops when they took the stage for a duet on their hit, "Marvin Gaye." And yes, they made out at the end of the song.

That wasn't the only duet of the night. Luke Bryan and Karen Fairchild of Little Big Town teamed up for "Home Alone Tonight." And Macklemore & Ryan Lewis linked up onstage with soul singer Leon Bridges. Plus, Alanis Morissette and Lovato sang "You Oughta Know," marking the 20th anniversary of the song.

Newly single Gwen Stefani performed her new personal song, "Used to Love You," which comes just a few months after her split from Gavin Rossdale.

Nick Jonas, meanwhile, did a medley of his singles, including "Chains" and "Jealous," while Walk the Moon performed the hit "Shut Up and Dance." Coldplay took the AMAs stage for the first time in seven years for a live rendition of "Adventure of a Lifetime." The Weeknd was surrounded by flames for his performance of "The Hills."

Even "Star Wars" made it into the evening. To coincide with the upcoming release of "The Force Awakens" Harrison Ford appeared onstage to introduce Pentatonix and an orchestra performing the classic "Star Wars" theme.

The evening took a more somber tone with a touching tribute to victims of the recent Paris attacks. Jared Leto gave an emotional speech on behalf of the AMAs, remembering victims of terrorist attacks around the world as he called for peace. Singer Celine Dion then paid tribute by singing Edith Piaf's "Hymne à L'Amour" in French.

Justin Bieber closed down the show with an acoustic version of "What Do You Mean?" before launching into "Where Are U Now?" and "Sorry." During "Sorry" water poured down, drenching the Canadian pop star.