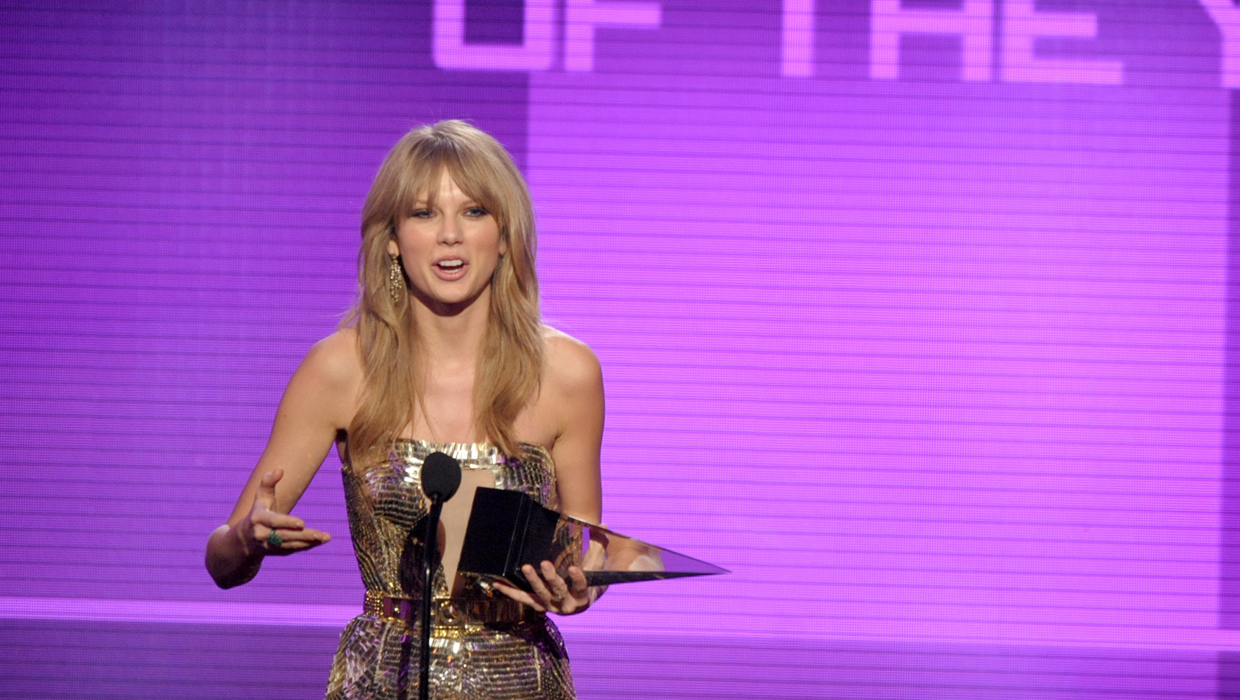 "My lucky number is 13, and so far you guys have made 2013 the most magical year so far," she said to her fans during her acceptance speech. "I'm 23 and I have no idea what's going to happen to me...I love you so much. It's unbelievable."

Swift, donning a short gold dress, also received the favorite country album honor for "Red." She said, "I cannot believe what you've done in the last year. This album came out almost exactly a year ago and the fact that 6 million of you went out and bought it is crazy.. Thank you, you are everything to me. I really appreciate this." Swift thanked radio when she received yet another awards -- favorite female country artist.

But the "We are Never Ever Getting Back Together" singer wasn't the only taking home honors. She also gave out an award, presenting the first trophy of the night -- favorite pop/rock male -- to Timberlake. "These are voted on by the fans – everyone who took to their Twitter…and got busy, this means so much to me, thank you," he said. He later returned to the stage for two more awards: favorite soul/R&B male artist and favorite soul/R&B album.

Rihanna swooped up her seventh American Music Award -- favorite soul/R&B female artist. It marked the third time she’s won the AMA in that category. Later in the night, the first-ever AMA Icon Award also went to the R&B pop star, with an introduction by Bill Maher, who said that Rihanna "has become the voice of our time." Her mother graced the stage to present her superstar daughter with the honor, saying, "Tonight I applaud and admire for being so strong and so positive and so humble and so focused. It's amazing how you I'm so blessed to be part of this historic moment."

Rihanna told her mom she loved her before saying, "I'm terrible at giving speeches."

"Just about 20 years ago I began giving your life a living hell with my husky...man voice, as you called it," she said looking at her mother. "I annoyed every one of my neighbors....I can't believe at 25 years old I'm holding an Icon Award. That sounds weird saying that out loud."

Macklemore and Ryan Lewis accepted the favorite rap/hip-hop album award via live satellite from Miami. They got serious during their acceptance speech, talking about racial profiling and citing the Trayvon Martin case. Ben Haggerty, the rapper known as Macklemore, said, "Due to the fact that we are in Florida tonight accepting this award I want to acknowledge Trayvon Martin and the hundreds and hundreds of kids each year that are dying due to racial profiling and the violence that follows it. This is really happening. These are our friends, our neighbors, our peers and our fans, and it's time that we look out for the youth and fight against racism and the laws that protect it." They later did a performance live from Miami, which was broadcast on the show.

It was also a big night for new star Ariana Grande, who not only performed in the early part of the show but also walked away with the best new artist honor, topping Florida Georgia Line, Imagine Dragons, Macklemore & Ryan Lewis and Phillip Phillips.

Single of the year -- a new award -- went to Florida Georgia Line and Nelly for their hit "Cruise," topping Robin Thicke's "Blurred Lines."

Katy Perry kicked off the American Music Awards Sunday with some serious star power, taking the Nokia Theatre stage in Los Angeles to perform her latest single, "Unconditionally." Donning a traditional Japanese dress, the pop singer was joined by dancers for the live performance of the latest single off her "Prism" album.

Pitbull then got the fan-voted show under way, by making a joke about picturing the entire audience naked. "It's a miracle, America, that I’m here tonight," he said before bringing a group of dancers onstage to show off popular dance moves through the years.Performances were plentiful throughout the show, with the members of One Direction showing off their vocal chops with a stripped-down performance of "Story of My Life." Imagine Dragons heated things up with a rendition of the hit “Radioactive.” The night’s host Pitbull and Ke$ha teamed up for a performance of "Timber."
Timberlake, meanwhile, hit the stage with an acoustic guitar in hand, introducing his performance by saying, "We're JT and the Tennessee Kids. This is a song about alcohol." He then launched into his country-tinged "Drink You Away" song. Florida Georgia Line and Nelly brought some real country with their hit, "Cruise" before doing Nelly's "Ride Wit Me."
Lady Gaga, who entered the red carpet on a horse, began her performance by answering a series of phone calls, the last one being from R. Kelly, or "President Kelly," as Gaga called him. They then performed their hit song, "Do What U Want," with a backdrop that was supposed to be the White House. R. Kelly played the president, with Gaga as his sexy mistress while things got hot on a mock Oval Office desk.
TLC reunited onstage to perform "Waterfalls" nearly two decades after the release of "Crazy Sexy Cool." And it sounded just as good.
Miley Cyrus helped closed out the three-hour show with "Wrecking Ball," which will likely become yet another talked-about awards show performance. She stepped out in a bikini-like get-up filled with cat images, accompanied by massive earrings and bracelets. The kitty theme continued when an image of a cat appeared on the screen lip-syncing throughout the entire song. The hologram was set against a space background, making for an odd, head-scratching performance.
Other performers included Jennifer Lopez, Kendrick Lamar, Luke Bryan and A Great Big World with Christina Aguilera.

Going into the ceremony, Macklemore & Ryan Lewis led the nominations with six, and Taylor Swift and Justin Timberlake each had five. Robin Thicke, Rihanna and Florida Georgia Line had four nods each, while Bruno Mars and Imagine Dragons were up for three awards each.

Tell us: What did you think about this year's AMAs?