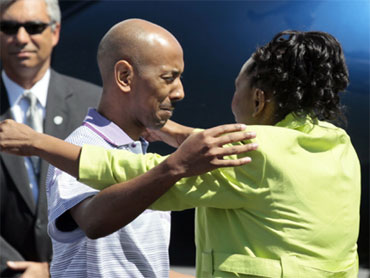 An American held captive for seven months in North Korea stepped off a plane in his hometown Friday, looking thin but joyful as he hugged the former president who had helped win his release and family and friends surrounded him in a group embrace.

Aijalon Gomes was accompanied by former President Jimmy Carter, who had flown to Pyongyang negotiate his release. Gomes, who had been teaching English in South Korea, was imprisoned and sentenced to eight years' hard labor for crossing into the North from China on Jan. 25 for unknown reasons.

North Korea's state-run news agency reported last month that Gomes had attempted suicide, leading his family to ask for his release on humanitarian grounds. North Korea said this week it would release Gomes to Carter if the former president went to get him.

Gomes hugged Carter and then his mother before his loved ones encircled him, praying and waving their hands skyward. One man gripped a small American flag, and others held a banner behind them that read: "Welcome home! Disciple of the Lord Aijalon Mahli Gomes. Salvation is ours."

The banner also pictured a Christian cross and contained biblical references to Acts, Psalms, and Job, an Old Testament book about a man who survived great tribulation.

Gomes' mother and family members hugged Carter and shook his hand before the group headed inside the terminal, as Gomes smiled and waved at loved ones along the way. A few minutes later, Carter reboarded the plane and left Boston.

In a statement released earlier Friday, the family thanked Carter and said it felt blessed to welcome Gomes home after what it called "a long, dark and difficult period."

"I'm just joyful and grateful that my son is home and thank President Jimmy Carter for making sure that he was home safely," Gomes' mother, Jacqueline McCarthy, said as she left her home for the airport. "I thank God, I thank God, for everything everyone has done for us."

The family also thanked the North Korean government "for caring for Aijalon during his darkest days, then agreeing to release him on humanitarian grounds."

The statement requested privacy so Gomes could recover from the ordeal, saying that although he was returning home, "the journey towards healing really just begins today." The family passed by media microphones at the airport without commenting.

But later outside McCarthy's home, several of Gomes' relatives spoke to the media and said Gomes appeared to be fine physically.

His 19-year-old brother, Milton McCarthy Jr., described feeling "an overwhelming amount of joy and happiness" when he hugged Gomes.

"It was just like they said, a prayer being answered," he said. "It was truly a blessing."

Family members said they'd had a limited chance to speak with Gomes and added he wasn't expected back at his mother's home Friday, though they didn't say where he was staying.

"He's just grateful to be home, and he's just thanking God for his safe return," his cousin Ron Odom said.

In Washington, the Department of State welcomed the news of Gomes' release, saying officials are "relieved that he will soon be safely reunited with his family," spokesman P.J. Crowley said.

It was unclear what led Gomes to enter the repressive nation. He may have been emulating fellow Christian Robert Park, who was detained after he crossed into North Korea in December to highlight its human rights record, said Jo Sung-rae, a South Korean human rights advocate who met with Gomes. Park was expelled some 40 days later after issuing an apology carried by North Korean state media.

Gomes, whose full name is pronounced, grew up the inner-city Boston neighborhood of Mattapan, then headed to college at Bowdoin in Maine before going to South Korea to teach several years after graduating.

He was the fourth American in a year arrested for trespassing in North Korea, which fought the U.S. during the 1950-53 Korean War and does not have diplomatic relations with Washington. Journalists Laura Ling and Euna Lee were arrested last March and released only after former President Bill Clinton made a similar trip to Pyongyang to plead for their freedom.

U.N. Secretary-General Ban Ki-moon welcomed Gomes' release and commended Carter. He took the occasion to appeal to donors for emergency humanitarian aid to North Korea, which has been affected by recent flooding, U.N. spokesman Martin Nesirky said at U.N. headquarters in New York.