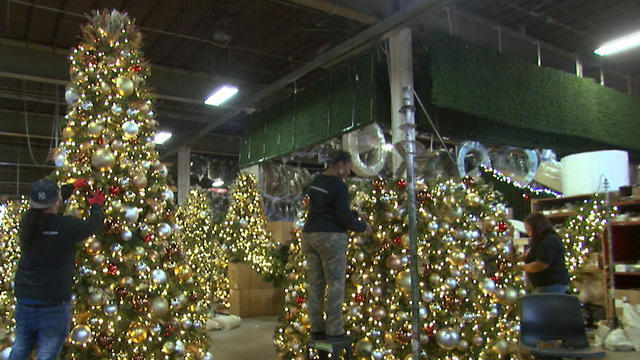 The Christmas shopping season is officially underway and millions of people -- tourists and locals alike -- make the pilgrimage each year to the shopping mecca of midtown Manhattan.

Retailers, office buildings, and even the world’s most iconic buildings and landmarks go all out to get into the holiday spirit in New York, with the help of one company that transforms this city into a holiday paradise, reports CBS News correspondent Michelle Miller.

On Monday, Saks Fifth Avenue turned into a “land of 1,000 delights.” That’s the theme of the show running every 10 minutes each evening from now through New Year’s. The display of 225,000 programmable lights, strobes, foliage and crystals took 11 months to produce and six weeks to install.

And that started with Fred Schwam and his company, American Christmas.

Miller and the CBS News team visited the company back in October, just days before the holiday treasures – like a 14-foot-diameter wreath that would hang in the General Motors building on Fifth Avenue – were trucked down to Manhattan.

“This is it! I mean this is my dream, you understand?” Miller said.

“This is a Christmas wonderland for sure,” Schwam said.

“The building is 110,000 square feet, and it is filled with every type of Christmas decoration and display that you could imagine,” Schwam said.

He also showed Miller a section of the 72-foot half-round tree that gets mounted on the façade of the Radio City Music Hall marquee. The full tree is wired with 10,000 LED lights. It took 25 people to build and 40 people to install.

“And we close three lanes on Sixth Avenue and work overnight, and overnight Christmas happens at Radio City,” Schwam said.

His clients are a who’s who of retailers up and down Fifth Avenue and in 30 cities around the country, like Cartier.

“We decorate the mansion on Fifth Avenue with a giant bow and ribbon and the panthers are a significant part of the Cartier marketing, so we have these lit panthers climbing up the buildings and sitting on the ledges,” Schwam said.

“We have thousands upon thousands of ornaments and novelties and florals and ribbons,” Schwam said. “I think our ability to organize all of these different materials and different elements is critical to our success.”

The company was a present of sorts from Schwam’s father when he was just a month away from graduating college. Marvin Schwam was a commercial artist specializing in artificial plant and flower arrangements, and he had a small Christmas division.

“But were you one of those kids who was like, ‘I am not going into the family business?’” Miller asked.

“So what sold you?” Miller asked.

“Well it was really a matter of -- my father’s circumstances changed in that he sold this larger corporation, and the company that he sold to was simply going to liquidate the inventory of the Christmas division,” Schwam said.

“And you were like, ‘Wait a minute, that’s the heart of the business!’” Miller asked.

“Right, we felt like there was an opportunity. So I bought back the Christmas division from the company that my father had sold it to,” Schwam said.

“Is it safe to say you’ve built this business to the point where it’s even bigger than the original business?” Miller asked.

“For sure,” Schwam said.

“And I literally walked every block of Manhattan and called everyone that I could possibly call,” Schwam said. “It took a number of years, but slowly but surely, I started to gain a clientele.”

He got his big break in 1997 when Radio City and Rockefeller Center got on board.

“We try to give our clients a sense of what we’re capable of and talk a little bit about our experience, and hopefully that will provide comfort and influence them to engage with us,” Schwam said.

“You’ve got to go big or go home,” Metrick said.

“What does American Christmas bring that nobody else does?” Miller asked.

“They bring that elevated energy. And they bring something – they know how to do it,” Metrick said. “The goal was to bring joy, and joy’s our big word this year. And really I think everyone needs it.”

“It’s fantastic!” said one visitor. “You only see something like this in New York City. It’s beautiful! It’s amazing!”

“It gives you that Christmas family -- that feeling of being with your family, that good feeling on the inside,” said another.

Schwam’s employees enjoy seeing their works on display just as much as anyone else.

“It must be thrilling when the lights turn on and the onlookers are there and their response to what you and your team have created,” Miller said.

“Yeah, for myself and for my entire team,” Schwam said. “Watching the reaction of people on the streets and watching literally thousands of people taking pictures in front of our displays – it’s a great thrill.”