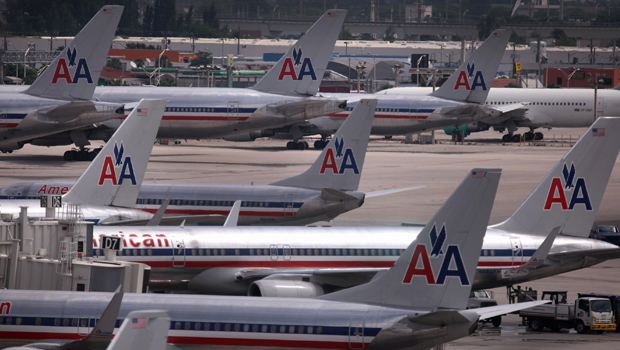 NEW YORK American Airlines' CEO acknowledges that passengers have had a rough few weeks on the airline but says the carrier is working through its issues.

"The operational performance is improving," CEO Tom Horton said in an interview with The Associated Press on Monday. "We'll get past this just like other airlines before us have."

The airline, which has been in bankruptcy protection since November, saw its on-time performance drop to 59 percent in September, according to Flightstats.com. In that same period Delta (DAL), Southwest (LUV) and U.S. Airways (LCC) were all above 85 percent. The airline has blamed the delays on pilots writing up extra maintenance requests as part of an unsanctioned job action.

The airline has cut flights and added reserve crews and extra planes to cover any last-minute delays. Now that the two sides are back at the bargaining table, Horton says customers should notice more on-time flights.

"Unfortunately for a couple of weeks there, it was very difficult on our customers," he said. He said the company's operating performance is "not yet back to the level we think our customers deserve and expect from American, but it has improved significantly since the period right after the contract rejection."

Despite its troubles, Horton said American remains committed to safety. The airline grounded 48 of its 111 Boeing 757s last week after seats came loose on three separate flights. The airline found a fix which Horton said should prevent future problems.

Horton presented four colorful slides to The Associated Press, pressing the idea that despite being in bankruptcy protection, American has been outperforming the rest of the industry in its passenger revenue growth. The six months of strong revenue come from recent revenue-sharing deals with British Airways and Japan Airlines and from strong demand for travel to Latin America.

The charts stated - without providing any specific numbers - that since American entered bankruptcy protection, it has renewed or won more corporate travel agreements than over the same period a year prior.

Horton would not discuss a potential merger with US Airways Group The two companies announced on Aug. 31 that they had signed non-disclosure agreements. In a separate interview Monday, the CEO of British Airways said his company was prepared to buy a minority stake in American's parent, AMR Corp. (AMR), if Horton asked.

"If American asks for it, I think that would be a big step," said Willie Walsh, CEO of International Consolidated Airlines Group, the parent of British Airways and Iberia.

He noted that American doesn't necessarily need the money but his company would invest to help cement their existing partnership.

"We think an investment in a restructured American will be a good investment. That's why we said we'd be very happy to look at it if the opportunity presented itself and if Tom welcomed it," Walsh said.

Foreign investors are prohibited from owning more than 25 percent of a U.S. airline.

"We've never put a figure on it but I can't see anything above 10 percent to be honest with you," Walsh said. "But again I'm speculating because we haven't done any formal analysis. But we're not looking for a significant minority stake."