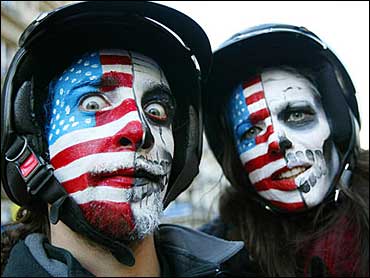 The years have not dimmed Bernadette Mouchel's respect for Americans. Nothing, the French retiree says, could erase her gratitude to the brave GIs — "those boys who died," she calls them — who liberated her Normandy farm from Nazi occupiers in World War II.

Which is why, 59 years later, the prospect of renewed war over Iraq leaves Mouchel deeply conflicted. Like others the world over, her attitude toward Washington is hardening. Despite her feelings for Americans, she can't help but voice — almost apologetically — concern that the United States is a superpower running amok.

"Business America, economic America, is just too powerful and it wants — I don't necessarily want to say rule the world, that might be too strong — but it wants nevertheless to keep an eye on the entire world's affairs," said Mouchel, aged 75.

In many corners of the globe, America's image is slipping. While the current crisis is over Iraq's weapons of mass destruction, the United States is on trial in the court of world public opinion for pushing efforts to disarm President Saddam Hussein by military force, rather than through slower but peaceful U.N. inspections.

Interviews by Associated Press reporters with dozens of ordinary people in nations as far-flung as France and China, Algeria and South Korea, suggest that goodwill and sympathy for the United States generated by the Sept. 11 terror attacks have evaporated.

For some, the United States is again — or always has been — the country they love to hate: America the brutal, America the hypocrite, America the implacable ideological or religious foe.

"We pray for America's destruction day and night," says Haider Khan, who drives a taxi in Pakistan's capital, Islamabad.

But beyond the zealots and outside the Muslim world, many others are torn between admiration for Americans and things American — they cite democracy, technology, Hollywood movies — and the discomforting reality of America the sole superpower, able and willing to fight alone if need be, despite international opposition.

"A year-and-a-half ago, we said we're all Americans. That has changed," said Emanuela Lo Monaco, an architect sipping juice in a Rome bar. But, she says, "How could someone not admire Woody Allen?"

"We like American things — just give us the choice, don't shove it down our throats, you know?" said Irish bank clerk John O'Donnell, lunching at a McDonald's in Dublin and gesticulating with a half-eaten Big Mac.

No survey can capture the global range of emotions the United States inspires. But there are common threads. No matter the language, words used these days to describe America are often the same: bent on war, arrogant, bullying, blind to the plight of the poor. At anti-war protests like those that brought millions onto streets worldwide this weekend, President Bush is lampooned as a bloodthirsty bandit or a cowboy.

"I don't need the Third World War," said Eleonora Chizhevskaya, a 68-year-old Russian retiree demonstrating in St. Petersburg. "The United States is just trying to save its dollar and it spits on the rest of the world."

But to others, American power is comforting. In Kabul, Afghan army major Sultan Mohammed frets that his country will plunge back into war if U.S. troops "get busy in Iraq and say goodbye to Afghanistan."

"We should be pleased that somebody else wants to do the dirty work for us — I mean fight evil and dangerous countries," says Slawomir Konopiek, a retired teacher in Poland. "If not America, who can do it?"

Martin Glas, a 72-year-old Czech retiree, regrets that no "world's cop," as he put it, was there to prevent World War II. "History could have been different. Hitler would never have become as strong as he was and my father would not have died in a gas chamber," said Glas, who is Jewish.

Even in the Middle East, attitudes are not always clear-cut.

"I don't like anything in America, except for the high standard of living and job opportunities," said Adnan Youssef, a Palestinian refugee in Lebanon. But he added: "If the Americans launch a war against Iraq, my hatred for them will increase."

Such hardline sentiment echoes across the Islamic world. "Bush is an assassin thirsty for oil and the blood of Muslims," says Aziz Moktari, a 22-year-old science major in Casablanca, Morocco.

"All this suspense about whether or not they will go to war is just to prove a point: 'Look, I have the power to push a few buttons and wipe this country out — I'm still boss,"' argued Mohamad Ismail, a Muslim businessman in Malaysia.

Outside the Islamic world, however, and even in France, which has led European opposition to an attack, many say their beef is not with America or the Americans, but solely with the Bush administration.

"War would be bad for the whole world — bad for the economy, bad for security, bad for peace," said a hawker waving fistfuls of pirated American movies on a street in Beijing, the Chinese capital.

"We understand where America's coming from. I don't like Saddam, he's dangerous and a little crazy. But Bush needs to be careful. ... He may be right about Iraq, but that doesn't mean he's right about war. He has to listen more to others," said the DVD seller, surnamed Dai.

A common argument in Europe, where tens of millions died in two world wars last century, is that U.S. leaders are ignorant of war's devastation because they have not experienced conflict at home.

Americans "live in a world of their own," complained Vit Vojtech, a Czech advertising executive. He nonetheless confessed that he likes Hollywood movies "because I love happy endings."

In Hong Kong, whose currency is linked to the U.S. dollar, and in Taiwan, which looks to Washington for protection against neighboring China, emotions are tuned to the economic might America wields.

"We'll be seeing another hike in unemployment. Our economy will be very much affected if there's any war," said Ivan Kaan, a Hong Kong computer engineer.

Others, especially in European cities already on heightened states of alert, fear that by infuriating Muslims, the United States will sow the seeds of future conflict and increase the risks of revenge attacks by extremists.

"If you kill terrorists, you just make more terrorists. They thrive on their grievances. You never wipe them out," said O'Donnell, the bank clerk in Dublin. "America needs to be subtle, patient — everything Bush isn't."