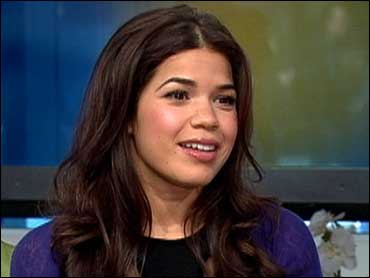 Perhaps best known for her character on the TV show "Ugly Betty," actress America Ferrera is returning to the big screen once again in "Sisterhood of the Traveling Pants 2."

There is no denying that there is a genuine bond in the "Sisterhood" bunch.

"We didn't know each other at all - the four of us - before we made the first preliminary," Ferrera told Early Show co-anchor Maggie Rodriguez. "We had no idea whether there was going to be a sequel or what was going to happen in the future. But we did create this bond very early on. So we stayed friends in the in-between time between the two films. When the second one came around, we were like, great, they want to take us to Greece and put us up and we get to work and be together. So it was a good time."

After the first "Sisterhood" the members of the cast became successful in their own ways.

According to Ferrera, their individual endeavors and past successes didn't change the dynamic on the set at all, instead it made them closer.

"We've been there for each other through the changes in our careers," she said.

"We really are friends. Thankfully Amber and Alexis have both been through the unique experience of being on a television show and being the title character and knowing what that schedule is like. So I really leaned on them for a lot of support the first year with 'Betty.' And then Blake started with 'Gossip Girl.' We said, 'this is what you have to do. Get someone now to help you do these things.' We stayed in touch. We really are as close as you can be when you've got crazy schedules."

In this movie, Ferrera's character, Carmen, learns an important lesson in self-esteem; you're the only person who can bring yourself down, a lesson that Betty might adhere to as well.

"She manages to stay confident. I think in ways that is a very general lesson. But the characters are so different. Betty doesn't let anything get to her. For Carmen, especially, in the first movie and this movie she leans on her friends very heavily."

Ferrera admitted that she too struggled with self-esteem issues in the past.

"I think anyone who hasn't is a miracle," she said.

Although Ferrera didn't necessarily look like everyone else in Hollywood, that never held her back.

"I don't think any of my self-esteem issues started with anything to do with my career. I think it started when you're wanting to fit in with the cool kids in 2nd grade. I think that's where it all begins. When I went away to college I had a very similar experience to Carmen and I could really relate to going away and being away from everything that's familiar. And I was outgoing and made friends easily and thought 'college will be a breeze. I'll fit right in. It will be fine' and then I got there and the first year was really difficult because nothing is familiar."

Ferrera, who is a Latina and portrays one on screen is able to showcase her heritage both on TV and film.

One type of character that she hasn't tackled is a superhero.

"The Sisterhood of the Traveling Pants 2" is now showing in theaters nationwide.