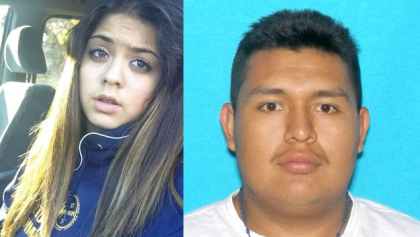 KENNEWICK, Wash. – The California Highway Patrol has issued an Amber alert for a missing 14-year-old who is believed to have been taken to Mexico, according to CBS Sacramento.

Elizabeth Romero was last seen leaving her school and getting into her boyfriend's green Ford Escape SUV.

The Tri-City Herald reports that police believe the teen could be in danger. She is believed to be with 19-year-old Edwardo Flores Rosales.

Police say the girl's mother contacted them Wednesday afternoon after her daughter did not return home from school. Sgt. Ken Lattin says the girl was last seen getting into her boyfriend's vehicle about 11 a.m. Wednesday at Phoenix High School.

Officers say the girl's mother received a text message Thursday from an unknown phone number from someone claiming to be Elizabeth and saying she was headed to Mexico with her boyfriend.