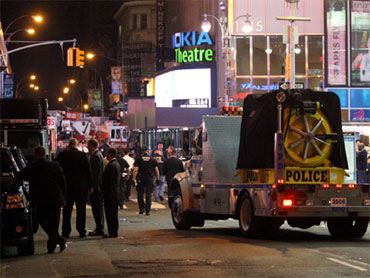 New York Mayor Michael Bloomberg says a suspicious vehicle in Times Square "did indeed contain an explosive device," which he described as "amateurish."

The mayor spoke at a news conference early Sunday along with Police Commissioner Raymond Kelly. The two officials hastily returned back to the city after attending the White House Correspondents' Association dinner in Washington. President Obama was also in attendance at the dinner.

"We avoided what we could have been a very deadly event," Bloomberg said. "It certainly could have exploded and had a pretty big fire and a decent amount of explosive impact."

"I think the intent was to cause a significant ball of fire," Kelly said.

"We often say that when a terrorist is caught he has a map of New York City in his pocket," said Bloomberg. "That's a conversation I had earlier tonight in Washington, and tonight is a further reminder of the dangers that we face."

Bloomberg thanked the police for their work and said no other suspicious activity was detected in the city.

"This city is safe and we should all go about our business," Bloomberg said. "Tomorrow the weather's going to be nice. It's a Sunday. People should go and enjoy themselves and just be thankful."

The mayor said an "alert T-shirt vendor" who was a veteran of the Vietnam War alerted police to white smoke coming from the SUV. A mounted police officer then investigated further.

That led to a white robotic police arm breaking windows of the black Nissan Pathfinder to remove any explosive materials while heavily armed police and emergency vehicles shut down the city's busiest streets, teeming with taxis and theatergoers on one of the first summer-like days of the year.

"There were explosive elements, including powder, gasoline, propane and some kind of electrical wires attached to a clock," Browne said early Sunday. "No motive has been identified."

An officer noticed smoke coming from the SUV around 6:30 p.m. and cleared the streets. The area remained closed more than seven hours later.

Police are investigating a report that someone was seen running from the vehicle at some point and are reviewing security videotapes, Browne said. The Nissan Pathfinder's license plates do not match the car's registration, he said.

Police evacuated several residential and commercial buildings and cleared the streets of people. Police were deployed around the area with heavy weapons on empty streets in the heart of busy midtown Manhattan.

Nobody is in custody, the official said.

Paul Bresson, head of the FBI's public affairs office at bureau headquarters in Washington, said agents are on the scene with the New York Police Department and that the matter is being taken seriously.

Mr. Obama was updated on the incident at about 10:45 p.m. Saturday, White House press secretary Robert Gibbs said in a statement. That was around the time the correspondents' association dinner was wrapping up. Mr. Obama spoke at the event before headliner Jay Leno.

The president praised the quick response by the New York Police Department.

Times Square, known as the Crossroads of the World, is one of the busiest urban areas in the U.S. and is typically teeming with people.

Some tourists reported hearing a small explosion hours after the car was first located.

CBS Radio News reports the area is heavily covered with security cameras and that footage may show who parked the SUV there and when.

Police evacuated several residential and commercial buildings and cleared the streets of people. Police were deployed around the area with heavy weapons on empty streets in the heart of midtown Manhattan that normally teem with thousands of theatergoers and tourists.

Shelly Carlisle, of Portland, Ore., said police crowded into her Broadway theater after the curtain closed on "Next to Normal," a show on the same block where the SUV was found.

"At the end of the show, the police came in. We were told we had to leave," Carlisle said. "They said there was a bomb scare."

The block that was closed is one of the prime blocks for Broadway shows, with seven theaters housing such big shows as "Billy Elliot" and "Lend Me a Tenor."

The curtain at "God of Carnage" and "Red" opened a half hour later than usual, but the shows were not canceled, said spokesman Adrian Bryan-Brown.

Katy Neubauer, 46, and Becca Saunders, 39, of Milwaukee, were shopping for souvenirs two blocks south of the SUV when they saw panicked crowds.

"It was a mass of people running away from the scene," Neubauer said.

Said Saunders: "There were too many people, too many cops. I've never seen anything like it."

A NYPD public information officer told CBS News the car was initially thought to be on fire. Firefighters later found that the car was smoking, not on fire, but the suspicious package was found in the car's back seat.

The car was first reported to police at 6:33 p.m. Eastern time, the officer said.

Officials told CBS News Station WCBS-TV in New York that there were no injuries at the scene. As a precaution, the bomb squad was brought to the scene and used a robot to inspect the package.

Vehicle and foot traffic was blocked off from Broadway to Seventh Avenue and between 44th and 46th streets. Times Square lies about four traffic-choked miles north of the site where terrorists bombed the World Trade Center in 1993, then laid waste to it on Sept. 11, 2001.

In December, police evacuated thousands of holiday tourists from Times Square after finding a white van that had been parked there for days without license plates and blacked-out windows. No bombs were found, and police later said they overlooked the van because it contained a parking placard for a nonprofit police group.

In March 2008, a hooded bicyclist hurled an explosive device at a military recruiting center in the heart of Times Square, producing a flash, smoke and full-scale emergency response. No suspect was ever identified.

Police have spent years trying to crack down on street hustlers and peddlers preying on tourists. But there have been two major instances of gunfire in recent mnonths. A street hustler armed with a machine pistol exchanged shots in December, shattering a Broadway theater ticket window, before police fatally shot the man.

Four separate shooting incidents and more than 50 arrests on a mile-long stretch of Manhattan last month around Times Square prompted the mayor to call the mayhem "wilding."