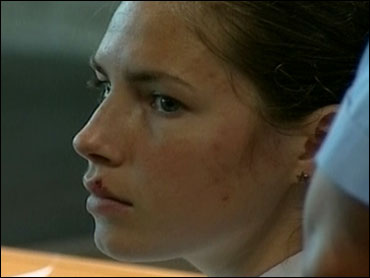 As Italian prosecutors began their closing arguments Friday in the trial of an Amanda Knox, the American student accused of killing her British roommate more than two yearsago, her parents are confident she'll be found innocent.

"If the decision is made from the evidence in the court of law, she will be found innocent," Curt Knox told CBS' "The Early Show" Friday. Knox described his daughter as "anxious" as the trial winds down because "her life is in someone else's hands."

Knox and her Italian ex-boyfriend Raffaele Sollecito are charged with murder and sexual violence in the 2007 killing of Meredith Kercher in the central Italian town of Perugia. They deny wrongdoing. Both have been jailed for more than two years and appeared to be tense as they sat in court Friday.

Prosecutors say Kercher was killed during what began as a sex game.

A third man, Ivory Coast national Rudy Hermann Guede, was sentenced to 30 years in prison last year for Kercher's murder in a fast-track trial he was granted at his request. He also denies wrongdoing and is appealing his conviction.

In his appeal, Guede claims that he saw Knox running from the crime scene - a charge that has been reported publicly and could potentially sway her trial.

"It's a concern because the jurors are not sequestered," Edda Mellas, Knox's mother, told "The Early Show" co-anchor Maggie Rodriguez. "However, what I've been told is that his story just wasn't credible. He says that Amanda arrived at her own house and rang the door bell. That doesn't make any sense. So, you know, yes, it's disturbing, but we're not too worried."

Prosecutor Giuliano Mignini reconstructed Friday what he says happened the night of Nov. 1, 2007, when the 21-year-old Kercher was slain in the apartment she shared with Knox.

As he opened his remarks, Mignini focused on a key prosecution argument that Knox and Sollecito broke one of the apartment's windows from the inside to stage a burglary.

A stone was found in one of the bedrooms, and previous witnesses have said that shattered glass was found all over clothes lying on the floor, suggesting the glass was broken after the room was messed up.

"The key to the mystery is in that room," Mignini said, adding that it would be nearly impossible to climb that window and enter without hurting oneself and leaving blood traces on the shattered glass.

Also, he argued, that window was the most exposed of the apartment, making it an unlikely choice for a burglar. Nothing in the room with the broken glass, which belonged to one of Knox's and Kercher's roommates, was reported missing, Mignini noted.

Prosecutors were expected to formally make their sentencing requests to the eight-member jury Saturday, while a verdict is expected in early December. Knox and Sollecito could face Italy's stiffest punishment, life imprisonment, if convicted of murder.

Knox's parents said they're prepared for the worst, but remain optimistic that their daughter will spend Christmas with them in their native Seattle.

"All along we've been hopeful. Even when the prosecution was presenting their case, it was a good day for us," Mellas said. "So we're hopeful, but so far it hasn't gone the way it's supposed to, so we're also concerned."

Defense lawyers for Knox and Sollecito are working on the theory that Guede was the sole attacker.

The 22-year-old Knox maintains she spent the night of the murder at Sollecito's house in Perugia. The 25-year-old Sollecito has said he was home working at his computer that night. He said he does not remember if Knox spent the whole night with him or just part of it.