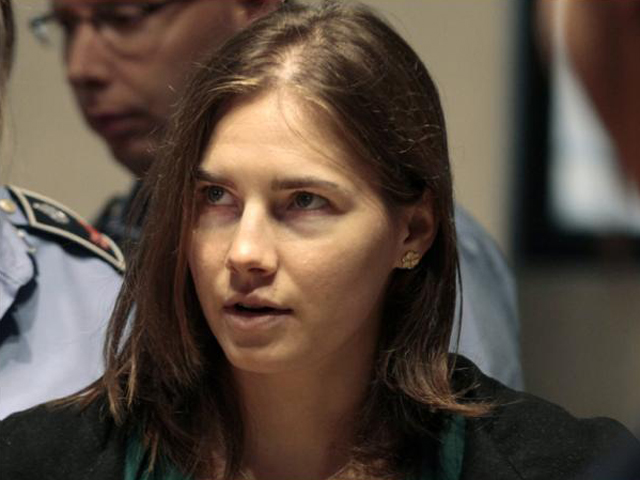 FLORENCE, Italy - Amanda Knox declared her innocence in her roommate's 2007 murder in a highly unusual email Tuesday to the Italian court hearing the case against her. The former U.S. exchange student also said she was staying away from the trial out of fear of being wrongly convicted.

Presiding Judge Alessandro Nencini read the five-page email written in Italian into the court record. He noted that the email, presented by Knox's lawyers before their closing arguments, was not a normal procedure in Italy. He said it highlighted Knox's absence and indicated it did not have the same legal standing as a declaration made in person.

"Who wants to speak at a trial, comes to the trial," Nencini said, adding that he had to take the word of her lawyers that the email originated with Knox. "I never saw her. I don't know her."

Knox explained her absence was out of fear that she would be wrongly convicted, which she contends happened during the first trial against her and her former boyfriend, Italian Raffaele Sollecito. The case against Knox and Sollecito is being heard for a third time.

Knox, now 26, spent four years in jail in Italy. She was permitted to return to the United States in 2011 after she was acquitted on appeal - a decision overturned in March by Italy's highest court, which sent it back for a second appeals trial.

Sollecito, 29, has appeared at several hearings, declaring his innocence in remarks to the court last month.

"I am not in court because I am afraid. I am afraid that the vehemence of the prosecution will make an impression on you, that their smoke will get in your eyes and blind you," Knox said in the email. "I am not afraid of your powers of discernment, but because the prosecution has succeeded already in convincing a court comprised of responsible and perceptive adults to convict innocent people, Raffaele and me."

She said she was following the case closely "given that my life is at stake."

Meredith Kercher, 21, was murdered in November 2007 in the apartment she shared with Knox in the picturesque Italian university town of Perugia. She had been raped, stabbed dozens of times in the face, had her throat slashed and her body left beneath a blanket in her bedroom.

Knox declared her innocence in Kercher's death, saying the two were friends without any conflicts between them. She also said she had no contact with Rudy Guede, a small-time drug-dealer who is serving a 16-year sentence for Kercher's murder. Prosecutors claim Knox and Sollecito carried out the murder with Guede, whose conviction specifies that he did not act alone.

Prosecutors are seeking a 26-year sentence against both Knox and Sollecito for the murder, and an additional year added to Knox's three-year slander conviction - which stands - for wrongly accusing a bar owner of the murder. Prosecutors say the slander amounts to an aggravating circumstance, claiming that Knox lied to deflect investigators' attention from her.

Knox, in the email, said she falsely accused bar owner Patrick Lumumba under pressure from the Italian police, who made her sign a false confession "that made no sense and should not have been considered legitimate evidence." She said she was denied a lawyer during 50 hours of interrogation over four days in Italian, a language she said she barely knew at the time.

"They lied to me, yelled at me, threatened me, and gave me two slaps on the head," she wrote.

In their closing, Knox's lawyers said police never should have arrested Lumumba, who was held for two weeks on the basis of Knox's confused statements.

Defense lawyer Carlo Dalla Vedova said that the changing scenarios for the murder and the lack of Knox's motive were weak points - and that in there is not sufficient evidence to convict.

"The lack of motive alone is a reason for acquittal," Dalla Vedova. He added that "there was a lack of proof, and consequently doubt."

While prosecutors have pointed to Knox's DNA on the presume murder weapon and that of the victim on the blade, Dalla Vedova argued that it doesn't make sense for the defendants to have carried the kitchen knife from Sollecito's apartment to murder Kercher, then put it back at his house.

A murderer, he said, would have more likely tossed the weapon into the ravine below the house where the young women lived.

The defense has said Knox used the knife for domestic purposes and that the DNA trace attributed to Kercher has been put into question.

Dalla Vedova said Knox was a victim of "judicial harassment" starting from the long interrogations without a lawyer. She said Knox should have been dropped from the investigation, along with Sollecito, when a bloody handprint on a pillow in Kercher's bedroom pointed to Guede.

"Guede's handprint on the pillow from the beginning was the signature of the crime," Dalla Vedova said.

The trial continues Jan. 9 with summations by Sollecito's defense, followed by rebuttals by both sides the next day. Nencini said the court would deliberate on Jan. 15.