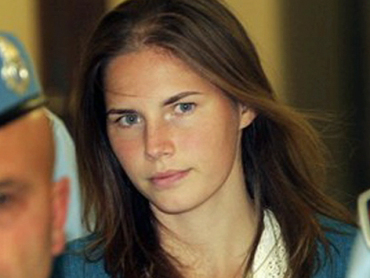 NEW YORK (CBS) Two weeks ago, students at Pepperdine University in California organized a Free Speech Week on campus to commemorate the signing of the U.S. Constitution on September 17, 1787.

While the students were honoring free speech, Pepperdine's administration was preparing heavy-handed tactics to muzzle one of its outspoken employees - the kind of decidedly anti-free speech action that the founding fathers were likely trying to prevent.

And what did Pepperdine consider off-limits speech? Was it union organizing, tea party rallies, budget cut demonstrations? No. Incredibly, it was the Amanda Knox case in Italy. The American student from Seattle had somehow become, in Pepperdine's view, she who could not be mentioned - at least not as possibly innocent.

Overlooking the Pacific Ocean in Malibu, Pepperdine is a Christian school with an enrollment of 7,000 students. Steve Moore was the Deputy Director of Public Safety at the university. Moore is a former FBI agent who retired from the bureau two years ago. When he came to Pepperdine, Moore improved several aspects of campus security. He received good performance reviews.

Then he took a challenge from his wife and everything changed.

Last year, Moore's wife watched a 48 Hours | Mystery program about the Amanda Knox case. Knox was convicted of the 2007 murder of her roommate in Perugia. The show raised serious doubts about the case against Knox (editor's note: the writer of this piece worked on that show).

Being ex-law enforcement, Steve Moore was skeptical of 48 Hours | Mystery's Knox program, but his wife was not. She challenged her husband to look into Knox's conviction. So, Moore read about Knox's trial in Perugia, watched the crime scene videos, and reviewed the evidence. Moore concluded that Amanda Knox did not murder her roommate and that she was an innocent victim of a miscarriage of justice.

Steve Moore posted both his reasoning and his conclusions about the Knox case on the internet. At injusticeinperugia.com, a site that supports Knox, Moore laid out his detailed case for Amanda Knox's innocence.

This month, Moore took his advocacy to television. He told Harry Smith of CBS News' The Early Show that there was no evidence to support Knox's conviction. Moore told the local CBS station in Seattle that he was so sure of Knox's innocence that, "When Amanda comes home, if she needs a roommate, I'll send my daughter over."

In TV interviews, Moore has said that he is not writing a book about the case; that he has no relationship to Amanda Knox's family; and that he is not profiting from his viewpoint. In the media, Moore identified himself as a "former FBI agent."

He did not associate his views about the Knox case with Pepperdine University.

Two weeks ago, while its students were writing some of their thoughts on a hastily constructed "Free Speech Wall" on campus, Pepperdine's administration was preparing to write to Steve Moore that if he didn't stop talking about Knox, he would be have to resign. Pepperdine felt Moore's advocacy for Amanda Knox was incompatible with keeping his job at the university.

At least in principle, Pepperdine's own principle, the university seems to be ignoring one of its core values. Pepperdine's "Affirmation Statement" says, "That, truth, having nothing to fear from investigation, should be pursued relentlessly in every discipline".

Nonetheless, Steve Moore was fired Wednesday when he refused to resign and he refused to stop speaking his mind about the Knox case. His own university security force helped escort Moore off the Malibu campus at five in the afternoon.

Jerry Derloshon, Pepperdine's executive director of Public Relations, told Crimesider that the university would have no comment about Steve Moore because it was a "personnel issue."

One possible university concern about Steve Moore was the fact that Pepperdine has a foreign program in Florence, Italy. The question arose at the university: Could Moore's criticism of Italian prosecutors cause problems for the Pepperdine students in Florence? The answer seems to be, no. The Graphic, Pepperdine's student newspaper, learned that the Florence campus was completely unaware of Moore's campaign on behalf of Amanda Knox and, furthermore, the Florence campus had received no negative feedback from anyone in Italy regarding Moore.

Steve Moore is paying a financial price for his stance. He has lost his job. Two of his children were planning on going to Pepperdine, where they would have attended for greatly reduced tuition. Along with the Moore's job, that is now history.

Steve Moore says he is exploring his legal options regarding his Pepperdine firing. And he says he is more motivated than ever to continue to speak out about the Knox case. "I have paid too high a price to stay quiet," Moore told Crimesider.

"Pepperdine gave me the option of staying," Steve Moore says, if he stopped talking about Amanda Knox. And Moore says, "If I had any doubts about her innocence, I would have stayed. But I don't."