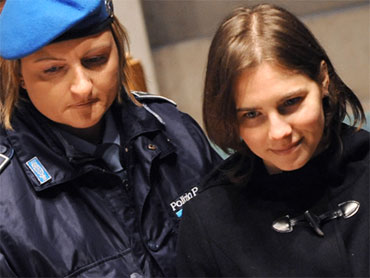 PERUGIA, Italy - A defense attorney called it a victory in search for truth.

An Italian judge has ordered key DNA evidence used to convict American Amanda Knox and her former boyfriend Raffaele Sollecito of murder to be reexamined.

Independent forensic experts will have 90 days starting next month to review crucial evidence linking Knox to the murder of her British roommate, an appeals court said Saturday.

The appeals judge said the review was merited on the ground of reasonable doubt, reports CBS News correspondent Allen Pizzey.

The independent experts appointed by the appeals court, Stefano Conti and Carla Vecchiotti from Rome's Sapienza University, were formally sworn in at today's hearing.

They will begin their review on Feb. 9 at a university lab, conclude by May 9, and report their findings to the court on May 21.

Their lawyers have disputed DNA traces used to back up their convictions and obtained an independent review at the start of the appeals trial.

Kercher was stabbed to death the night of Nov. 1, 2007. Her body was found in a pool of blood the following day in the apartment the 21-year-old shared with Knox. They were both exchange students in Perugia, a university town in central Italy.

The defense says those DNA traces were inconclusive and that they might have been contaminated when they were collected and analyzed.

The prosecution maintains the DNA review will once and for all prove that errors were not made, Pizzey reports.

The two independent experts can either make new analyses on the DNA traces that were found, or, if that isn't possible, review the analyses that had been carried out by previous forensic experts and assess whether they are reliable. Experts appointed by both the prosecution and the defense will be present during the review.

On CBS' "The Early Show on Saturday Morning," Amanda Knox's step-father Chris Mellas said, "Things are progressing nicely. You know, one of the things that we really needed to have happen is for this evidence to be checked by a third party, and the fact that it's finally now under way, it's very good.

"Even more so, the fact that they're interested, really, in going a little bit above and beyond what the court even requested," he said.

When asked which evidence he thought was most significant to Knox's appeal, Mellas said, "I would say it's more the lack of evidence. There isn't any evidence, as far as we're concerned, that shows that Amanda had anything to do with it or Raffaele, but there's the two most divisive pieces - the bra clasp and the knife. And that's what's going to be examined right now."

While the evidence review is being carried out, the trial will continue with witnesses sought by the defense aimed at challenging the reliability of a key prosecution witness who said he had seen Knox and Sollecito by the house the night of the murder. Knox and Sollecito insist they were at Sollecito's house.

The defense was given permission to requestion a prosecution witness, a homeless man (now charged with drug dealing) who claimed he saw Knox and Sollecito near the scene on the night of the murder. He based his timing on buses he said he saw passing. But the defense will call bus officials to say there were none scheduled that night.

There will be at least three more hearings to question witnesses (the next being held on March 12) before the DNA experts have to report back.

The whole process could stretch on for months, says Pizzey, and even if they win, Knox and Sollecito will have been in jail for almost four years.

Having visited with Amanda in prison yesterday, Mellas said she is doing "pretty good."

"She's a little bit apprehensive," he said. "You know, things are starting to roll again, and there's kind of a conflict between getting her hopes up, and at the same time, not wanting to be disappointed at the end, if that, you know, because of the potential.

"We always wonder if this is good, or whether this is just kind of a show," he said. "It's hard to tell. . . . [But] we're certainly on the right path. You know, the fact that things are being looked at, that's what we've asked for the entire time."