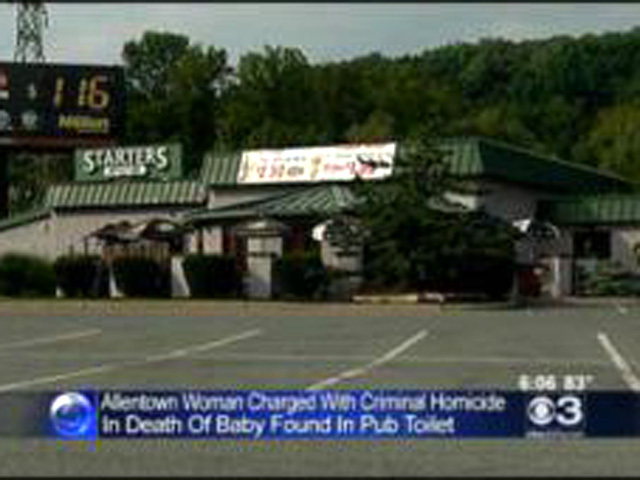 (CBS/AP) EASTON, Pa. - Authorities say a Pennsylvania woman gave birth to a son in the bathroom of a sports bar, then abandoned him to die in the restaurant's toilet.

Amanda Catherine Hein was arraigned Monday and held without bail on one count of criminal homicide in the death of her baby last week.

A cleaning crew found the baby's body Aug. 19 at Starters Pub in Bethlehem, about 30 miles north of Philadelphia. Authorities said the baby was at 33 to 36 weeks gestation and viable.

An autopsy found the baby was born alive, the Northampton County coroner said.

In an interview with police, the 26-year-old Allentown woman admitted giving birth to the baby boy in the restroom a night earlier, wrapping him in a plastic bag from a garbage container and placing him in the toilet tank, court documents said.

District Attorney John Morganelli said Hein was watching a pay-per-view wrestling event with several other people when she complained of back pain and excused herself.

One of the men told police she was gone for a long time before returning to the table, getting her purse and going outside to smoke. The man said he saw that she was bleeding and asked if she needed to go to the hospital, but she told him she didn't have insurance and he dropped her off at her house.

Hein told police that no one else knew she was pregnant or that she had given birth in the bathroom, according to an affidavit of probable cause.

Parents who do not wish to raise a newborn child can anonymously turn the baby over to any hospital in Pennsylvania.

Court records do not list an attorney for Hein.