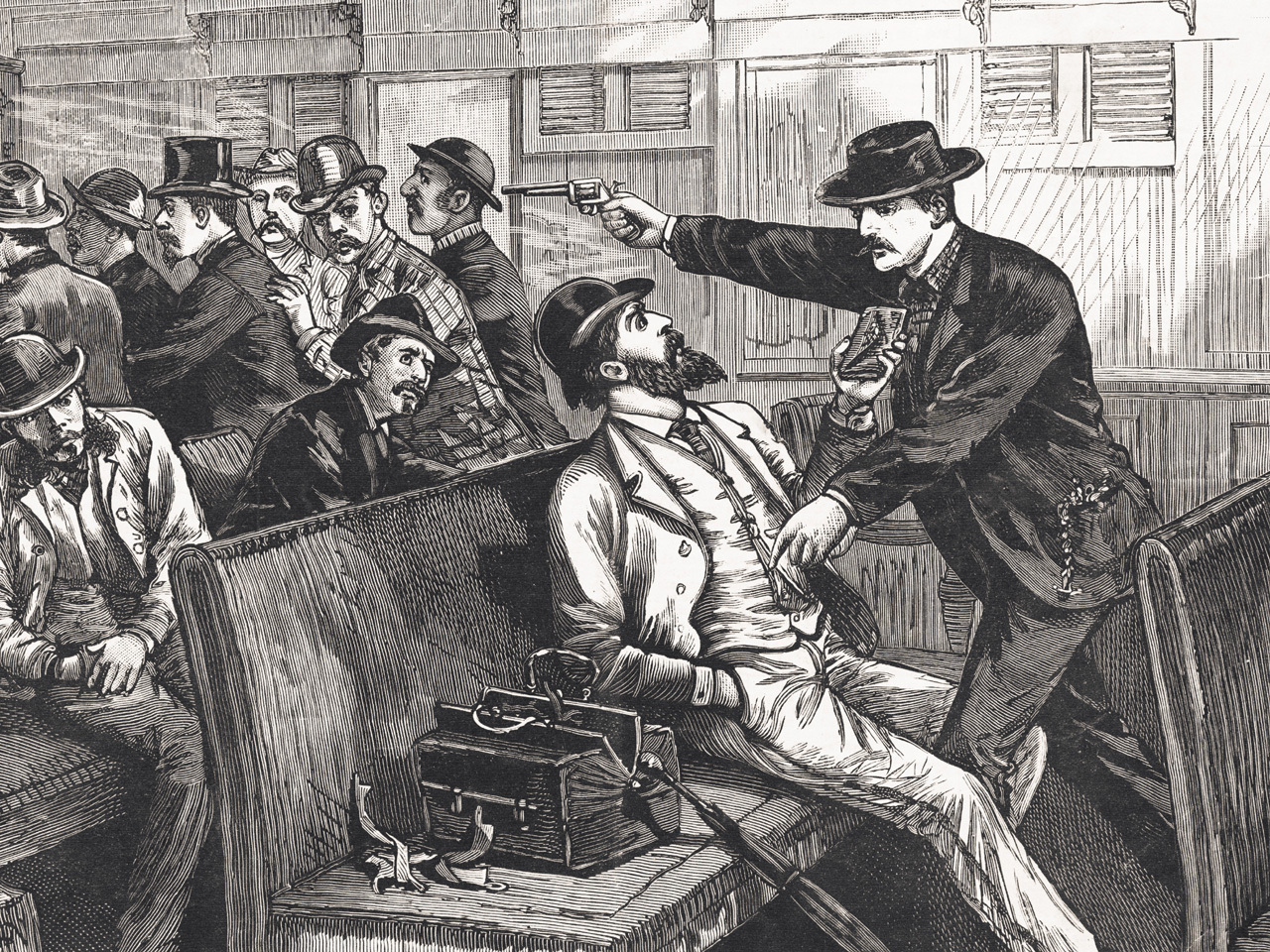 For it was on a rail line west of Cincinnati that day that a train was robbed by an armed gang . . . possibly diehard Confederate guerrillas unbowed by the South's recent surrender.

"While everything was wild with confusion," one newspaper reported, "the desperadoes entered, and with the vilest oaths, demanded the money and valuables of the passengers."

The first train robbery in the United States, by some reckonings.

It was hardly the last.

Over the next few decades, lawmen scrambled to capture a succession of notorious robbers, such as the notorious Jesse James, even as the gunmen's daring deeds were capturing the public imagination.

The crime wave inspired the landmark 1903 film "The Great Train Robbery," while many years later, in 1969, Paul Newman and Robert Redford portrayed the exploits of the robbers known as "Butch Cassidy and the Sundance Kid."

Though the days of armed passenger train robberies are behind us, freight train theft remains a problem.

In 1995 Scott Pelley showed us nightscope footage of thieves at work in the deserts of the Southwest. And just last fall, Atlanta police investigated the theft of roughly 100 guns from a parked freight car.

An FBI estimate puts cargo and freight thefts from ports, trucking and rail at as much as $30 BILLION a year.

And though a figure strictly for freight train theft is hard to come by, Jesse James' descendants are no doubt getting their share.

An account of the Ohio & Mississippi Railroad robbery from the Cincinnati Times, as reprinted in the Cleveland Leader, May 10, 1865:

THE GUERRILLA ROBBERY NEAR CINCINNATI
Attack on the Ohio and Mississippi Railroad -- Train Stopped and Passengers Robbed -- Incidents &c.

THE TRAIN THROWN FROM THE TRACK.

The regular 8 P.M. train on the Ohio and Mississippi railroad left the depot in this city at the usual hoar, bound for St. Louis. It was composed of four passenger coaches, a baggage car, and the Adam's express car.

The train was heavily loaded with passengers, quite a number of them being ladies.

About seventeen miles and a half from Cincinnati, and between the stations known as Gravel Pit and North Bend, the locomotive ran from the track, and tipped over on one tide, the cars following in a promiscuous smash up. The Adams Express car and the baggage car were capsized with the engine, and both badly damaged. The first passenger coach stove through the end of the baggage car, producing considerable havoc. The remainder of the train was not severely injured, and kept the track.

The first shock of the crash of course awakened in the minds of the passengers the idea that it was an ordinary railroad accident, but the volley of firearms and the shouts outside which followed immediately after undeceived them, and the nature and cause of the mishap became palpably evident when two desperadoes made their appearance at each car, and backed by two more who kept guard outside, commenced pillaging the passengers.

MODUS OPERANDI OF THE ATTACKING PARTY.

Subsequent developments have revealed the plan pursued by the guerrillas in capturing the train, and show that considerable skill was manifested in its design. The band, numbering about twenty, crossed in skiffs from the Kentucky shore sometime during the day, and made their arrangements to attack the night express train to St. Louis, probably as being the one which might repay them, robbery being their only object.

They selected a spot where the track of the road runs in close proximity to the river, and simply displaced one of the rails, not tearing up ten or a dozen, as one of our morning cotemporaries [sic] has it. The advancing train, when it reached the place, was, as we have seen, thrown violently from the track. As soon as the first crash was over the guerrillas, who were armed with navy revolvers, fired a volley over the cars, and with oaths warned the passengers not to make any demonstrations or they would have their brains blowed out.

THE WORK OF ROBBERY.

While everything was wild with confusion in the passenger coaches the desperadoes entered, and with the vilest oaths demanded the money and valuables of the passengers. One of the party delivered himself of the following chivalrous sentence as he entered one of the cars: "Rob every d----d man, but don't hurt the ladies."

The plundering was very general and thorough. Few, save the coolest, succeeded in saving anything in the line of money and valuables. Gold watches, pocketbooks, diamond pins and money package changed hands in remarkable quick time.

One poor soldier returning home was robbed of three hundred dollars; and although he begged hard to be permitted to retain a portion of the money, the villains took all. Another individual was relieved of a gold watch, and five hundred dollars in greenbacks. Still another lost two hundred dollars, besides a watch and valuable breast pin. The conductor, Mr. Shephard, had forty dollars taken from him; but by cutting the lining of his coat-pocket and allowing the contents to drop into the skirt, succeeded in saving $320. The engineer likewise lost a valuable watch. We are unable to give any estimate of the aggregate loss of passengers, but it was heavy.

While the work of robbing was going on in the passenger coaches, five of the villains plundered the express car. This car, as we have stated, was capsized and badly smashed up, and in such a way as to completely imprison the messenger, Mr. Pierce who, after the accident, thrusting out his head from a small opening, to see what was going on outside, was greeted by a loud oath from a desperado standing near, who threatened to blow off the top of his head if he did not get back.

The party, with the aid of an ax, soon cut their way into the car, and drew out the money safes, three in number. They demanded the keys from the messengers under the pain of death, but two of the safes being through from Cincinnati to St. Louis, he was only able to open for them the local safe. The others they blew open with gunpowder, having vainly endeavored to force the doors with the ax. The amount lost by the Express cannot be accurately stated, but it was not very large. There is known to have been some Seven-thirty bonds and other valuables.

The mail and baggage, we understand, were not molested, and are consequently safe.

APPEARANCE OF THE DESPERADOES.

The guerrillas were all, save one, dressed in citizens' clothes, and were remarkably villainous in bearing and action. One of the party they addressed as Lieutenant and another as Captain. They carried no arms but revolvers, and these they were constantly flourishing around in the most threatening manner.

One of the desperadoes shot at the conductor, who showed signs of resistance, but fortunately mined. They also fired at the baggage-master, who attempted to escape up the bank after the train had been thrown from the track. All of them seemed anxious to get through the business as soon as possible.

After pillaging the train the party made for the river, and it is supposed crossed immediately to the Kentucky side.

At 12 o'clock the train from St. Louis arrived at the wreck, and the remainder of the passengers were transferred immediately, and went to St. Louis. A temporary track has been laid around the wreck, and the 7 A.M. train, this morning, was not delayed. Only one passenger was severely hurt by the cars running from the track, and he was brought to the city this morning.

The military authorities in this city were promptly informed of the occurrence, and General Palmer notified of the facts at Louisville. This morning a party of sixty men left here in pursuit of the party, and a force will also be organized in Kentucky. It is earnestly hoped that the perpetrators of this audacious attack may be captured and appropriately punished.

Prompt action was taken by the military authorities in reference to capturing the gang. General Palmer, at Louisville, was informed of the facts and before day light General Willich had a detachment of sixty men, under command of Captain Booth, ready to proceed to the vicinity of the disaster, which went down on the seven o'clock train. A force of cavalry also went down from Covington on the Kentucky side. Captain Booth returned Saturday evening, without having discovered any clue to the retreat of the brigands. Nobody in the neighborhood had seen them previous to the arrival of the train, and only a fisherman, in a hut nearby, saw the scene from outside the cars, and saw the fellows fleeing to the river. On the Kentucky shore it was learned that a farmer had missed two of his horses, and that the fugitives had hastened back toward the interior. The cavalry that went in pursuit have not been heard from.

According to The New York Times of May 8, 1865, the Adams Express Company offered a reward of $500 "for each and every person who shall be arrested and convicted as a participant in the robbery of either the passengers or the Express on the occasion." It is believed the robbers were never captured.