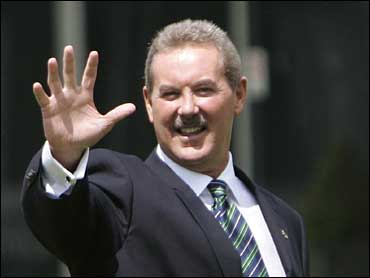 On paper, it looked like R. Allen Stanford was making all the right moves.

Subprime mortgages? His companies never got involved. Risky loans? He said he never made one.

"There has never been, and there will never be, an easy way to make money," Stanford wrote to investors last year. "It requires discipline, knowledge, experience, hard work and plain common sense."

But U.S. investigators say Stanford's companies weren't based on any of that. Instead, they say, the Texas billionaire financier's offshore bank and financial companies used rosy financial predictions and old-fashioned deceit to lure investors into a scam.

The Securities and Exchange Commission shut down three of Stanford's companies this week. FBI agents in Houston are running a parallel investigation, according to a U.S. official who spoke on condition of anonymity because the criminal probe is ongoing. Stanford has not been charged with any crime.

At the behest of the SEC, the FBI tracked down Stanford on Thursday in Fredericksburg, Va., and served him with court documents. But billions of dollars remain unaccounted for. The government's court papers describe a company that bears little resemblance to the one described in glossy, unfailingly upbeat corporate documents.

"While others in our industry are fighting for their survival, we are growing our business," Stanford's wrote to investors while proudly announcing that 2007 was a record year of growth. "While others in our industry have seen a complete turnover in management and are grappling with how to develop a new business strategy, our core leadership team remains intact, and our investment philosophy of global diversification remains unchanged."

On the Caribbean island of Antigua, Stanford International Bank appeared to have found the perfect portfolio, one that minimized risk but generated consistently high returns. While investors in safe U.S. certificates of deposit could count on a roughly 3 percent return, Stanford offered CDs with twice that return.

In 2007, the Stanford International Bank investment portfolio earned more than 10 percent, more than twice what the S&P 500 earned. The bank assured depositors that a team of experts was analyzing investment risk daily, making sure the money was safe.

"Especially in these difficult times, our success speaks for itself," the 58-year-old Texas billionaire wrote in a mid-2008 newsletter. "I have an unbridled optimism and enthusiasm for our future."

Company publications are filled with the symbols of economic power: pictures of skyscrapers, private jets, serious-looking executives focused on scrolling stock tickers, board room scenes and Zurich, Switzerland, at dusk. Stanford's letters to investors boasted of the bank's social responsibility, its cutting-edge technology and its tradition of hiring the "best of the best" to manage their money.

Regulators now say the Stanford portfolio was basically a "black box." Much of the money was tied up in real estate and private equity - companies that don't trade on public stock markets. None of the bank's CDs were registered with the SEC, regulators said. And rather than a team of 20 analysts, authorities say, Stanford and his longtime friend, James M. Davis, were the only ones overseeing the money.

Had the company's estimated 50,000 investors looked past the glossy photographs and past Stanford's buoyant optimism, they might have been skeptical. Steve Wells, a forensic accountant and Western Kentucky University professor, said the bank sugarcoated its numbers by relying on management estimates and ignoring future credit losses.

The company also made it hard to tell exactly what the portfolio's investments were. Any accountant who looked at those reports would have told investors to be cautious, Wells said.

Yet the numbers were alluring: Double-digit returns, and in tax-free Antigua to boot.

The exotic locale only added to the attraction.

"A visit to Antigua is part of the overall experience of the Stanford service and quality," a company memo reads.

Bank employees were instructed to arrange visits only for clients with $5 million or more to invest. Employees were encouraged to tell their bosses about client interests, such as "amateur sailor," so visits could be personalized.

In the company's mid-2008 newsletter, Stanford said his company was not disheartened by "doom and gloom" economists predicting a long recession.

"Even the most severe down cycles can bring opportunities that yield significant benefits in the long run," Stanford wrote. "This proven, well-grounded approach when making investment decisions and giving investment advice will benefit you, our clients, in these tumultuous times as never before."

Early this year, cracks began to show in Stanford's once unbridled optimism. Regulators noticed an alarming increase in wire transfers as Stanford International Bank tried to move money out of its investment accounts. Clients were prohibited from cashing out, regulators said.

As for the billions of dollars invested in the bank's seemingly safe, lucrative portfolio, the SEC has hired a receiver to scour the world looking for it.