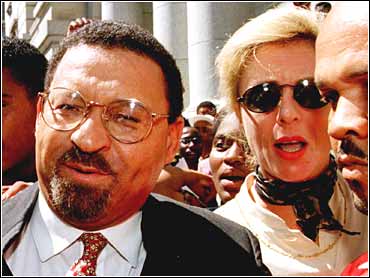 The court, however, dismissed one of Boesak's four fraud convictions and reduced his prison sentence to three years from six years.

The ruling by the Supreme Court of Appeal marked the end of the fall of one of the most visible foes of South Africa's former racist regime.

In the 1980s, Boesak helped lead the campaign for black liberation as a top official with the African National Congress. The former head of the World Alliance of Reformed Churches traveled the world to highlight apartheid's injustice.

But last year, Boesak was found guilty on four counts of fraud and theft involving $400,000. He stole the money mainly from foreign donors to his Foundation for Peace and Justice charity, including Simon.

In the appeal, Boesak argued that some of the money Simon had donated was meant to be a personal gift for him.

His lawyers said Boesak had been punished enough by the collapse of his religious and political careers. They also proposed that, since he was a leading freedom fighter, Boesak should be fined and not imprisoned as he has two children to provide for and no previous convictions.

Boesak and Anglican Archbishop Desmond Tutu were the most prominent opponents of white rule inside South Africa during the last decade of apartheid, which ended with Nelson Mandela's election as president in 1994.

Evidence in his original trial showed that Boesak used the money for two luxury houses and to pay his wife for unspecified purposes.

The judges cleared Boesak on charges of stealing from a Swedish aid grant for voter education ahead of the 1994 all-race elections that ended apartheid.

Boesak, who has consistently denied his guilt, was not in court. His lawyers said he would have 14 days in which to report to prison authorities to begin serving his sentence. They declined to say where he was staying.

There was no comment from South African President Thabo Mbeki's office, but the ruling African National Congress (ANC) greeted the decision with sadness.

"The court ruling comes as a great shock, but the ANC's view was that justice must run its course," said Cameron Dugmore, a Western Cape spokesman for the ANC.

"We'll, however, never forget the contribution he made in liberating our country," he added.

The opposition Democratic Party (DP) said Boesak's jailing showed the independence of the country's courts. "The DP views this ruling as a clear sign that justice should prevail for all people and institutions," the party said in a statement.

Boesak and Tutu often marched arm-in-arm into the teargas and batons of police battling to shore up the crumbling system of white domination they abhored.

But while Tutu led a modest life in a township home, Boesak enjoyed fast cars and expensive restaurants, lived in one of Cape Town's richest suburbs and had a series of public love affairs that outraged his religious followers.