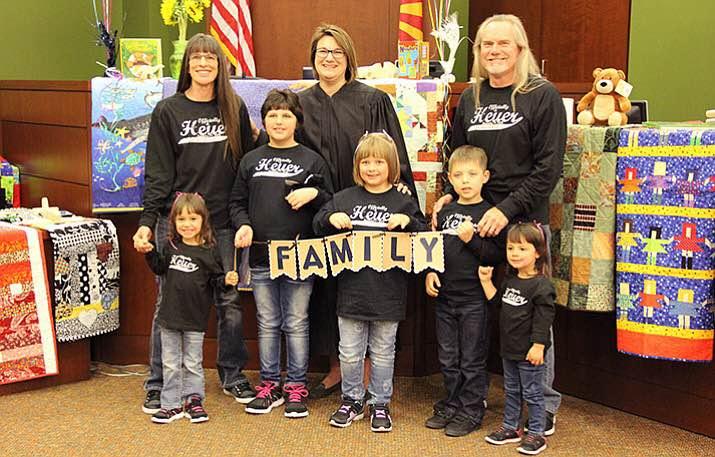 In the past 12 years, Brenda and Curt Heuer have fostered a total of 52 children.

Brenda’s parents did foster care the entire time she was growing up, and the woman from Prescott, Arizona, wanted to continue the tradition. The couple made a pact when they first started: they would treat the foster kids like their own biological children.

Every vacation, every camping trip, the kids would come along.

Over the past decade or so, the Heuers have had a different mix of children — ages, genders, ethnicities — but they always looked to house siblings so the kids wouldn’t have to split up.

“We always tried to cater to the larger sibling group of children to keep them together,” Brenda told CBS News.

Two years ago, the Heuers took in a family of five, four girls and a boy.

As time passed, the Heuers were starting to realize that the kids had nowhere else to go. Their father had been killed, their mother severed ties with the family years ago and relatives were unable to care for so many children.

“Due to the circumstances, knowing these children would likely be separated, and that’s all they had left in this world is each other — it’s just heartbreaking,” Brenda said. “We didn’t want to see that happen.”

That’s when she got the idea to adopt them all. After talking it over with her husband for a few months, they decided to go through with the adoption.

“This is what they had wanted for the last year or two that we had them,” Brenda said.

It was a perfect fit. The whole family loves going boating, camping and traveling together.

On November 19, National Adoption Day, the Heuers officially signed the paperwork and their family quickly grew by five.

No one saw this coming, but everyone has been very supportive and cheerful that we would open up our home to these kids and keep them together, Brenda said.

To celebrate the occasion, the family is heading to Disneyland.

“That’s all they’ve ever wanted to do since they’ve been with us,” Brenda said.