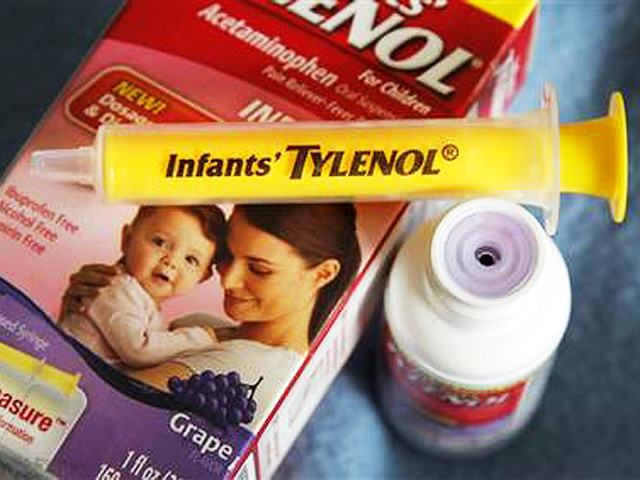 (AP) All infant Tylenol is being pulled from U.S. shelves because some parents have had problems with Johnson & Johnson's redesigned bottles. The company introduced the new bottles three months ago, claiming they were a big safety improvement and made to measure doses easier.

But parents and caregivers have instead complained that the protective cover on top of the bottles doesn't work correctly. While it is meant to limit the amount of medicine that is drawn into a plastic syringe, the cover instead pushes into the bottle when the syringe is inserted, consumers say. The plastic syringe has an opening in the tip but no needle - it's meant to squirt medicine into the baby's mouth.

Recall-prone J&J's McNeil Consumer Healthcare unit has had about 25 product recalls since September 2009, and said Friday it is recalling all 574,000 bottles of grape-flavored, liquid Infants' Tylenol from stores nationwide.

"Today's news about the Infants' Tylenol recall is clearly disappointing after all the progress that McNeil has been making to ensure its products meet the highest level of quality and consumer satisfaction," CEO William Weldon said in a statement. McNeil changed the design to make it easier to get the dose right and to limit spillage if the bottle is knocked over, McNeil spokeswoman Barbara Montresor said. The prior version had an open-topped bottle and a dropper with a flexible bulb at the top, similar to a turkey baster.

Last spring, Weldon told shareholders at J&J's annual meeting that the company was simplifying the packaging to "help a mom, dad or caregiver ensure the correct dosing." Weldon told The Associated Press then that he thought the new design would become the industry standard.

McNeil spokeswoman Bonnie Jacobs said it was too soon to say when the product will return to the market.

"We are looking at various alternatives for the redesign of the dosing system and will set a timeline ... once we've reviewed all the options," she said.

The company said customers can continue to use the infant Tylenol if the bottle's flow restrictor remains intact. If not, they can request a refund by contacting McNeil at 1-888-222-6036 or http://www.tylenol.com .

Babies are particularly vulnerable to excessive doses of medicine, but J&J said there have been no reports of anyone being harmed.

McNeil is part of the consumer health business segment at J&J, which is based in New Brunswick, N.J. The company's prescription drug and medicial device divisions each have issued at least two recalls in the last couple years.

Reasons for the recalls have included nauseating package odors, small glass or metal particles in liquid medicines and wrong levels of active ingredients.