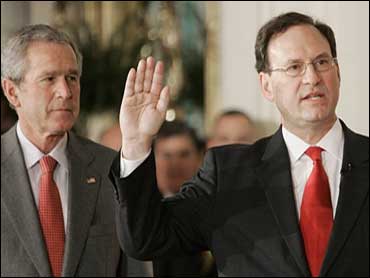 Alito, handling his first case, sided with inmate Michael Taylor, who had won a stay from an appeals court earlier in the evening. Chief Justice John Roberts and Justices Antonin Scalia and Clarence Thomas supported lifting the stay, but Alito joined the remaining five members in turning down Missouri's last minute request to allow a midnight execution.

Earlier in the day, Alito was sworn in for a second time in a White House ceremony, where he was lauded by President Bush as a man of "steady demeanor, careful judgment and complete integrity."

He was also was given his assignment for handling emergency appeals: Arkansas, Iowa, Minnesota, Missouri, Nebraska, North Dakota and South Dakota. As a result, Missouri filed with Alito its request for the high court to void a stay and allow Taylor's execution.

Reporters and witnesses had gathered at the state prison awaiting word from the high court on whether to go ahead with the execution.

An appeals court will now review Taylor's claim that lethal injection is cruel and unusual punishment, a claim also used by two Florida death row inmates that won stays from the Supreme Court over the past week. The court has agreed to use one of the cases to clarify how inmates may file last minute challenges to methods of execution.

Alito replaced Sandra Day O'Connor, who had often been the swing vote in capital punishment cases. He was expected to side with prosecutors more often than O'Connor, although as an appeals court judge, his record in death penalty cases was mixed.

Scalia and Thomas have consistently sided with states in death penalty cases and have been especially critical of long delays in carrying out executions.

Taylor was convicted of killing 15-year-old Ann Harrison, who was waiting for a school bus when he and an accomplice kidnapped her in 1989. Taylor pleaded guilty and said he was high on crack cocaine at the time.

Taylor's legal team had pursued two challenges: the argument that lethal injection is cruel and unusual punishment, and, the claim that his constitutional rights were violated by a system tilted against black defendants.

The court, acting without Alito, rejected Taylor's appeal that argued that Missouri's death penalty system is racist. Taylor is black and his victim was white. He filed the appeal on Tuesday, the day that Alito was confirmed by the Senate.