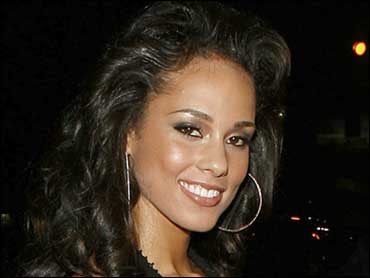 On a visit to "Late Show" with David Letterman, Alicia Keys said that she had a blast — alone — during her recent vacation.

"It was my first vacation ever in my adult life and I went totally by myself, I mean completely," she told Letterman. "I saw the Valley of the Kings, the tombs, the temples, I swam in the Mediterranean sea, I sailed down the Nile. It was amazing!"

"Sounds like you won a radio contest," Letterman quipped.

Letterman couldn't believe that the Grammy-winning singer traveled solo, but Keys insisted she left the entourage at home.

"I really, really was by myself. ... I loved it. I would go to the restaurant and the waiter would say, 'are you waiting for someone?' and I'd say 'no.'" said Keys. "They probably thought I was strange, but I loved it, I really did."

After her trip to Egypt, Keys hung out in Italy and went on from there to Greece where she ran in a marathon.

"I felt like (the marathon) was a great once-in-a-lifetime thing," she said. She added that her trainer neglected to tell her that she was about to run one of the toughest courses in the world.

He also didn't tell her the history of the course, which dates back to ancient times.

"A messenger ran from Marathon to Athens to shout the news that they won the war," she said. "But my trainer didn't tell me the messenger died."

Keys said that she decided to run a marathon after running to get in shape for her role as a hitwoman in her upcoming movie "Smokin' Aces," opening Friday.

Her next movie is "Nanny Diaries" opening in April. She's preparing her next album, and also keeping up with her foundation's charitable work.

Keys announced this week that she will be funding a four-city college scholarship program for high school seniors to attend college. The Open Door Scholars program, in conjunction with youth organization Frum Tha Ground Up, Inc. will provide financial assistance to students in Atlanta, Harlem, Jacksonville, Fla., and New Orleans to attend colleges and universities in their states.