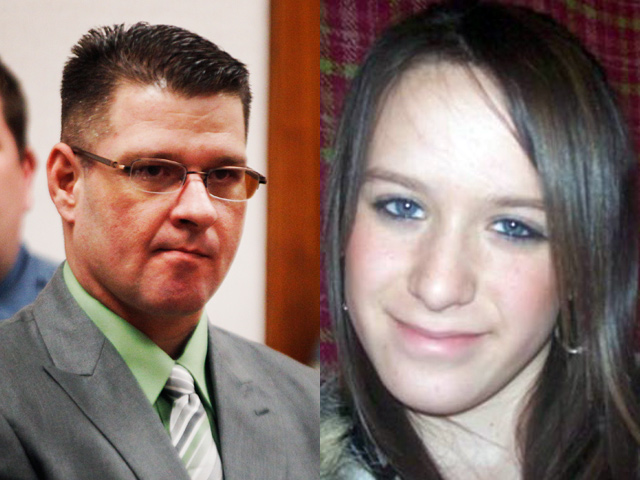 (CBS/AP) GREAT BEND, Kan. - The man found guilty of murdering 14-year-old cheerleader Alicia DeBolt, whose charred remains were found at an asphalt plant in central Kansas, faces life in prison without parole when he is sentenced today.

Adam Longoria, 38, was convicted of capital murder in April and although prosecutors did not seek the death penalty, Barton County District Judge Hannelore Kitts has little leeway in deciding his punishment because a capital murder conviction carries a mandatory sentence of at least life without parole.

Alicia was last seen alive leaving her home in Great Bend for a party just before midnight on Aug. 21, 2010. Her family reported her missing the next day, setting off a search that ended three days later when her remains, with traces of duct tape on her ankles and face, were found at the Venture Corp. plant outside Great Bend where Longoria worked.

Prosecutors showed jurors hundreds of text messages between Alicia and the then-36-year-old Longoria, who began pursuing the girl after meeting her at a party in July 2010. Those messages - including some showing he picked up the girl the night she disappeared - were featured prominently in the state's case.

Other evidence included gasoline on his gym shoes and video surveillance showing him buying $1.32 of gas on the night she disappeared. Longoria's now ex-girlfriend testified that he smelled of gasoline when he came home and that her car - which he had borrowed that night - reeked of it.

Several witnesses testified that Longoria asked them to lie about his whereabouts that night. Longoria's semen was also found mixed with Alicia's DNA in the vehicle.

Longoria was arrested after he fled Great Bend, driving an SUV he had stolen from the asphalt company, just hours after investigators searched his house.

The defense attorneys tried to cast doubt on the state's evidence, suggesting a tiny amount of DNA from an unknown male that was found in the girl's mouth indicated someone else may have killed her. They also told jurors that since Longoria had previously bragged about having sex with the girl, her DNA could have ended up in his car on another occasion.

DeBolt's mother and sister are expected to make victim impact statements Tuesday at Longoria's sentencing. It is not known whether Longoria, who did not take the stand at his trial, will make a courtroom statement.